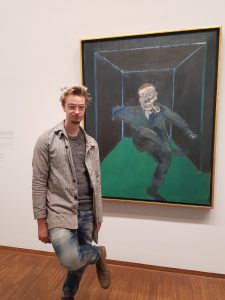 Tell us a little about yourself. Where were you raised? Where do you live now?
D. David Croot has been writing on and off (pretty much continually) for nineteen hundred years. He is no preternatural creature, no no no real special abilities, but he’s put in his four-trillion hours and it’s all for you my sweaty precious mongols.
-Follow the Feeling (most approachable for all)
-Twenty-first mankind blues (my favourite)
-The lovers (bonkers but new to literature)
-The general pointlessness of being (Coming of age written unlike anybody else)

At what age did you realize your fascination with books? When did you start writing?
I never read a word until I was twenty-one.
Actually…Flat Stanley when I was five. Stolen from the schools library. I have it, it still exists.
And then from twenty-one onwards, that time in your life where something worthwhile must be achieved…I wrote.
and failed
and failed
and failed
until I managed to conjure up Follow the Feeling. Then…then it grew from there. That was about four years of scribing 5-7 days a week. Whenever I could (ten failed novels in-between!) and others followed.
and then I failed
and failed and failed to get readers…

Who are your favorite authors to read? What is your favorite genre to read. Who Inspires you in your writings?
All the dead ones:
Knut Hamsun — Pan, mysteries,
Alberto Moravia- Boredom and contempt
Charles Bukowski — anything really.
Louis Ferdinand Celine — Journey to the end of the night
Herman Hesse, Yukio Mishima, Dostoevsky (hate spelling this legends name), Steve Tesich (Karoo is sublime), Strindberg and Baudelaire’s spirit lives on through me in a weird way.
and probably a fuck tonne more!

Tell us a little about your latest book?
I am in the process of finishing a novel about time.
The fairytale, the myth, the man (working title).
There are life’s ebbs and flows, part poetry, part prosody. Recurring motifs recycling themselves into new and intricate ways. It near enough sent me insane. Think Kobo Abe’s Kafka-esque dreams…