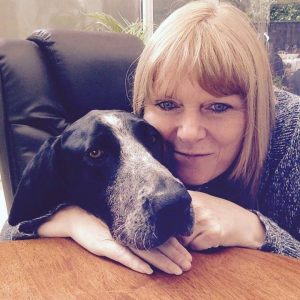 Tell us a little about yourself. Where were you raised? Where do you live now?
Hi, I write high fantasy with romance! Think epic battles with Immortals and beasts of all kinds, throw in some elemental magic, huge plot twists, portals and unique worlds and an ever-growing amount of characters trying to save their world (think it’s time to cull a few – oh no!). If you like character-driven fantasy, you’ll love these books. I warn you now, I don’t go easy on them…
I was raised and still live in England where I attended University to gain my BA in English Literature & Creative Writing and my Masters in Creative Writing.

I work with people who are homeless and when I’m not writing, I enjoy walks with my dog, Leo, who is a German Shorthaired Pointer. He knows more about the characters in my books than any dog should!

At what age did you realize your fascination with books? When did you start writing?
I don’t remember not reading. My earliest memories are reading, and fantasy has always been in my heart. I started with Enid Blyton’s, Enchanted Wood, moving on to C.S. Lewis & Tolkien.

I started writing later in life after my children grew up. My writing is motivated by creating new worlds and in-depth characters to live in them. I love how characters grow and overcome the challenges they face. I love plot twists! Being a discovery writer, my characters often surprise me and lead me into territory I wasn’t expecting to go.

I’m very interested in the oldest mythological texts (think pre Greek & Roman). The Voice that Thunders series is filled with ancient myth, the kind that is buried in soul waiting to be reawakened.

Who are your favorite authors to read? What is your favorite genre to read. Who Inspires you in your writings?
Favourite genre is fantasy (of course) but I read all genres.
I’ve been inspired by Sarah J Maas, Jay Kristoff, Patrick Rothfuss, Brandon Sanderson and a host of other fantasy authors. Outside of this, I get inspiration from researching mythical texts and epics of ancient Mesopotamia, Sumerian, Akkadian and Semite mostly.

Tell us a little about your latest book?
My latest book is called A Scream That Shatters which releases on the 3rd of December 2019. It’s a follow on from A Voice That Thunders and picks up where the first book left off.
Its tagline is A BROTHER FATED * A SISTER FREED * A SHADOW WHO DOESN’T FEAR THEM

Mirah has risen from the ashes of her slaughtered clan to become the greatest Elemental Wielder the immortals have ever known.
But the immortals craving her power are nothing compared to another darkness rising.  Mirah calls it the Shadow – a defiling beast trapped in the other realm who bound her to itself.
Her brother Gabe may be the Voice of Thunder destined to lead the war, but Mirah knows the Shadow is creeping closer and its reach is too powerful.  She has seen the devastating lengths to which it will go, and it shattered her heart.
Mirah faces a profound choice: stay and fight for humanity’s freedom, and risk the Shadow’s wrath, or flee to protect the brother she loves.

The book is filled with explosive revelations and betrayals where romances bloom and others are severed. It has an awesome new book boyfriend (move over Rowan and Rhysand haha 🙂

I was in-between leaving University and going back to work and had the luxury of writing from 6am-9pm every day over several months. I really got my head stuck in this world and it pays off. I also drafted the 3rd book, A Fire That Whispers (coming soon).