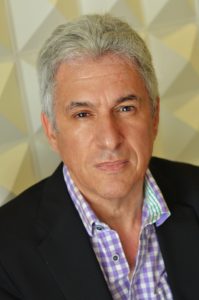 Tell us a little about yourself. Where were you raised? Where do you live now?
I am an award-winning writer of books and screenplays, and a TV and film director and producer. I have worked for major broadcasters and studios on a wide variety of successful projects in the US, UK, Australia, Europe, and the Middle East.

When I was young, a man behind a big desk who called himself a ‘Career Specialist’ fell about laughing when I told him I wanted to tell stories. The ‘Expert’ had other plans. “You should be an engineer, that’s what you should be,” he said. I ignored his advice and embarked upon a very different life.

Kill Code: A Dystopian Science Fiction Novel is my latest book-the first in an exciting new dystopian science fiction series set in a world facing climate catastrophe where nothing is what it seems.

Fans of fantasy adventure books like ‘The Hunger Games’, ‘The 5th Wave’, and ‘Divergent’ will be captivated by ‘Kill Code’.

Besides ‘Kill Code’, I also wrote ‘Scary Lizzy’ – a novel about an eight year old girl, Sarah Wilde, who befriends an African child ghost – and the teen action adventure book, ‘The Boy Next Door ‘ – or what happens when a teenage girl has a crush on her next-door neighbor, who isn’t all he seems. And I co-wrote ‘Art Pengriffin and The Curse of The Four’ – a young adult fantasy adventure about a teenage boy who discovers his father was Merlin the Magician. It was a Kindle Book Review Awards Semi-Finalist.

When I’m not writing, lazing on the beach, drinking coffee, reading, or going to the movies, I love to travel – anywhere, and anytime I have any spare cash. Oh, and I have a cat named Louis.

At what age did you realize your fascination with books? When did you start writing?
My fascination with books started when I was around four years old. I didn’t actually read them but used them to make ‘marble runs’ – structures constructing so I could run marbles down. It was only later that I realized that it was more fun reading them. My real interest in writing came when I was at school and about ten years old. My English teacher encouraged me to write.

Who are your favorite authors to read? What is your favorite genre to read. Who Inspires you in your writings?
As a kid, I read sci-fi books all the time. The novel Planet of the Apes (Pierre Boulle), which explored many of the themes that are still so relevant today particularly affected me. Since then I have read most of the master’s of sci-fi—Ray Bradbury, H. G. Wells, John Wyndham, etc. and more recently, Sabrina Vourvoulias’s (Ink), Emily St. John Mandel (Station Eleven) and the extraordinary Hav by Jan Morris. I love reading crime and thriller novels too, and the surprising twists and turns the principal characters go through when the genre is written by brilliant authors like the late Elmore Leonard, James Patterson, and Gillian Flynn. We often dismiss crime books as ‘pulp fiction’ but I find they can supply far more insight into people and their actions than so-called literary novels. I’m hoping eventually to write a series in this genre, but it’s a daunting task when you look at what’s out there already.

Tell us a little about your latest book?
The best way I can tell you about my latest book, Kill Code: A Dystopian Science Fiction Novel is to give you the synopsis. So, here goes:

It’s the year 2031. Our future. Their present. A world decimated by climate catastrophe, where the sun’s heat is deadly and the ocean rises higher every day. A world ruled by the rich, powerful, and corrupt. A world where a good man can’t survive for long.

Hogan Duran was a good man once. He was a cop, forced to resign in disgrace when he couldn’t save his partner from a bullet. Now Hogan lives on the fraying edges of society, serving cruel masters and scavenging trash dumps just to survive.

But after four years of living in poverty, Hogan finally gets a chance to get back on his feet. He’s invited to join the National Security Council, the powerful paramilitary organization responsible for protecting the rich and powerful from the more unsavory elements of society. All he needs to do is pass their deadly entrance exam, and he’ll be rewarded with wealth and opportunity beyond his wildest dreams.

But this ex-cop’s path to redemption won’t be easy. The NSC is hiding something, and as Hogan descends deeper and deeper into their world, he starts to uncover the terrible truth of how the powerful in this new world maintain their power…and just how far they will go to protect their secrets.

In a world gone wrong, can one man actually make a difference, or will he die trying?

Fans of The Hunger Games by Suzanne Collins, The 5th Wave by Rick Yancey, and Divergent by Veronica Roth will be captivated by Kill Code.

You’ll also love this book if you enjoy: