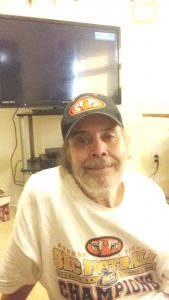 Tell us a little about yourself. Where were you raised? Where do you live now?
Chris H. Stevenson (pen name Christy J. Breedlove), originally born in California, moved to Sylvania, Alabama in 2009. His occupations have included newspaper editor/reporter, astronomer, federal police officer, house cleaner and part time miniature builder. He has been writing off and on for 36 years, having officially published books beginning in 1988. Today he writes in his favorite genre, Young Adult, but has published in multiple genres and categories. He was a finalist in the L. Ron. Hubbard Writers of the Future contest, and took the first place grand prize in a YA novel writing contest for The Girl They Sold to the Moon. He writes the popular blog, Guerrilla Warfare for Writers (special weapons and tactics), hoping to inform and educate writers all over the world about the high points and pitfalls of publishing.

At what age did you realize your fascination with books? When did you start writing?
My early writing accomplishment were multiple hits within a few years: In my first year of writing back in 1987, I wrote three SF short stories that were accepted by major slick magazines which qualified me for the Science Fiction Writers of America, and at the same time achieved a Finalist award in the L. Ron Hubbard Writers of the Future Contest. This recognition garnered me a top gun SF agent at the time, Richard Curtis Associates. My first novel went to John Badham (Director) and the Producers, the Cohen Brothers. It was an extreme honor to be considered. The writer who beat me out of contention for a feature movie (as well as the book), was Michael Crichton’s Jurassic Park. My book was called Dinothon.

A year after that I published two best-selling non-fiction books and landed on radio, TV, in every library in the U.S. and in hundreds of newspapers. B. Dalton and Walden Books carried my titles in all of their commercial outlets.

I have been trying to maintain that lightning in a bottle ever since. My YA dystopian novel, The Girl They Sold to the Moon won the grand prize in a publisher’s YA novel writing contest, went to a small auction and got tagged for a film option. My latest release, Screamcatcher: Web World, just currently won Best YA title of 2019. I received a 5-Star and badge in the Readers’ Favorite Review Competition, and took the bronze medal in the Reader’s Favorite International Awards Contest for 2020. I have 17 titles appearing on Amazon, the vast majority of them in the adult category.

Who are your favorite authors to read? What is your favorite genre to read. Who Inspires you in your writings?
Oh, like what I consider stylists: Poul Anderson, Virgin Planet, Peter Benchley, The Island and Jaws, Joseph Wambaugh, The Onion Field and Black Marble, Michael Crichton, Jurassic Park, Alan Dean Foster, the Icerigger trilogy, and some Stephen King. Anne Rice impresses with just about anything she has written. I think it’s the humor and irony that attracts me the most–and it’s all character related. Although I’m partial to SF and portal fantasies, I will read just about any genre if the characters grab me.

When seventeen-year-old Jory Pike cannot shake the hellish nightmares of her parent’s deaths, she turns to an old family heirloom, a dream catcher. Even though she’s half blood Chippewa, Jory thinks old Indian lore is so yesterday, but she’s willing to give it a try. However, the dream catcher has had its fill of nightmares from an ancient and violent past. After a sleepover party, and during one of Jory’s most horrific dream episodes, the dream catcher implodes, sucking Jory and her three friends into its own world of trapped nightmares. They’re in an alternate universe—locked inside of an insane web world. How can they find the center of the web, where all good things are allowed to pass?

Tell us a little about your latest book?
It all started with a dream catcher. This iconic item, which is rightfully ingrained in Indian lore, is a dream symbol respected by the culture that created it. It is mystifying, an enigma that that prods the imagination. Legends about the dream catcher are passed down from multiple tribes. There are variations, but the one fact that can be agreed upon is that it is a nightmare entrapment device, designed to sift through evil thoughts and images and only allow pleasant and peaceful dreams to enter into consciousness of the sleeper.

I wondered what would happen to a very ancient dream catcher that was topped off with dreams and nightmares. What if the nightmares became too sick or deathly? What if the web strings could not hold anymore visions? Would the dream catcher melt, burst, vanish, implode? I reasoned that something would have to give if too much evil was allowed to congregate inside of its structure. I found nothing on the Internet that offered a solution to this problem—I might have missed a relevant story, but nothing stood out to me. Stephen King had a story called Dream Catcher, but I found nothing in it that was similar to what I had in mind. So, I took it upon myself to answer such a burning question. Like too much death on a battlefield could inundate the immediate location with lost and angry spirits, so could a dream catcher hold no more of its fill of sheer terror without morphing into something else or opening up a lost and forbidden existence. What would it be like to be caught up in another world inside the webs of a dream catcher, and how would you get out? What would this world look like? How could it be navigated? What was the source of the exit, and what was inside of it that threatened your existence? Screamcatcher: Web World, the first in the series, was my answer. I can only hope that I have done it justice.

The entire trilogy series took me over a year to write and about two months of solid editing. That was working eight to 10 hours a day, non-stop.