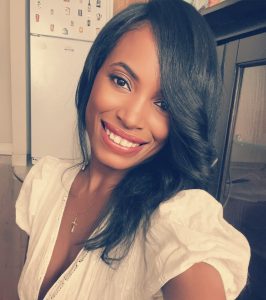 Tell us a little about yourself. Where were you raised? Where do you live now?
My Name is Christine Germain, and I am from Brooklyn New York. I am a nurse but working on becoming a full time writer. I had a beloved Boston Terrier Mix Named Busta Brown, but sadly he passed away in 2020.

At what age did you realize your fascination with books? When did you start writing?
I was Ten years old when I started reading books by R. L Stein. I was obsessed with books that had Supernatural/ Horror themes. Not only that, but I started writing short stories at the age of eleven and at the age of Twelve I wrote my first full length story called The Boy Next Door but later changed to The Brother’s Curse.

Who are your favorite authors to read? What is your favorite genre to read. Who Inspires you in your writings?
I love to read R.L. Stein, Mary Higgins Clark, Clive Barker & Stephen King. My Favorite genre is Horror, Suspense, and Mystery Thriller. I can say that I inspire myself in writing. It’s my determination that continues to keep me motivated in telling stories. Since I was a child I would always drift off and allow my imagination to run wild.

Tell us a little about your latest book?
My latest book is titled Christopher’s Curse which is the third novel in My series The Brother’s Curse Saga. The Brother’s curse Centered around a young woman named Crystal who received an amethyst pendant that held demonic entities. Her only way of surviving was to destroy the pendant along with two shape-shifter brothers that were after her to retrieve the heirloom and resurrect their 200-year-old demonic father and twenty-four evil entities.

Falling in love with one of the Brothers, Crystal goes down a dangerous dark path in the sequel leading to an unplanned pregnancy. Without spoiling the series too much. Christopher’s Curse now focuses on Crystal’s son who has received a gift by an unknown sender that leads to catastrophic events for his family, a politician, and the entire town of Lakeview Falls.

The Series has a mixture of Supernatural, Paranormal Romance, Horror, Suspense, Mystery Thriller, and Crime Themes. A story filled with diverse characters, a reading experience that makes you feel like you’re in included, and Lots of twist and turns that will leave you at the edge of your seat.