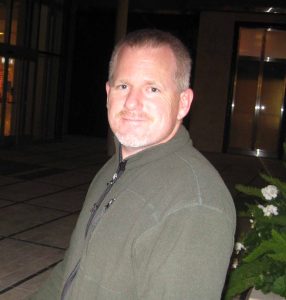 Tell us a little about yourself. Where were you raised? Where do you live now?
I am a husband, father, special education teacher, and writer. I was raised in San Diego, went to college at Humboldt State, and now live in the Sacramento area, vowing one day to move back to the Pacific Northwest. Currently, I do not have any pets. But my family and I were blessed to have two wonderful guinea pigs — Peanut Butter and Buddy — both of which recently moved on to the great hayfield in the sky. We miss them terribly.

At what age did you realize your fascination with books? When did you start writing?
I got hooked into books in the 8th grade, for about a solid year, reading mostly military history. Then I sidetracked with martial arts and drumming up until my last year in college, when I discovered the Dragonlance Chronicles. It’s been off an on since then, reading all sorts of genres. I got started writing about twelve years ago. I began with short stories, and within a few months, got my first acceptance letter. I’ve had over 100 stories published since, as well as two novels. Although a lonely endeavor, writing can be quite addictive.

Who are your favorite authors to read? What is your favorite genre to read. Who Inspires you in your writings?
Favorite authors and inspirations go hand-in-hand. My list is quite large, but here are some of my all time favorites: J. R. R. Tolkien, Tim O’Brien, Dan Simmons, Stephen Hunter, Louis L’Amour, James Rollins, and George Martin. I read a lot of small press publications as well, particularly in the weird fiction genre, and some of my favorites within are Robert Shearman, V.H. Leslie, Richard Gavin, and D. P. Watt. Khanh Ha is a very elegant writer. Cormac McCarthy’s THE ROAD is the most poignant novel I’ve read, while Hemingway’s THE OLD MAN AND THE SEA is the most satisfying. But if I had to pick just one writer I could read forever more, my vote would easily go to John Steinbeck.

Tell us a little about your latest book?
My latest book, titled THE BROKEN PINES, was a story I wrote a few years back, just after the publication of my debut novel, THE SINKING OF THE ANGIE PIPER. The inspiration for the novel came to me one day, as I was reminiscing about a time, years ago, when I worked with a young boy who had “lost” his ability to speak–he was suffering from a condition known as Traumatic Mutism. Something about that event stuck with me, all these years, such that I found a place for it in my story.
So that was the basis for my novel, in as much as I knew one of my characters would be a boy suffering from Traumatic Mutism. But what I had to figure out was all the rest. I needed more of a problem to solve, and that came with who this boy’s father was. Adding to the perplexity, I was watching Sons of Anarchy at the time, so of course, I just had to imbed the whole biker culture into the story. Which ironically opened the door to another element of my life, one that pertained to Humboldt County. Specifically speaking, the growing of marijuana, an endeavor I had nothing to do with (in all its forms), but nobody can live behind the Redwood Curtain for 12 years and not learn something.