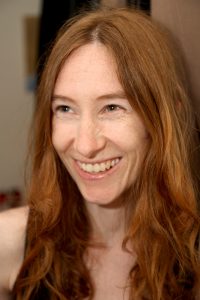 Tell us a little about yourself. Where were you raised? Where do you live now?
I am a Canadian author born in 1981.
I lived in Toronto for half of my childhood, and Ottawa for the rest. I then moved to Montreal (Quebec), originally to study theatre. I was an extra in movies, shows, and commercials. That’s actually how I met my husband Jeff, but we actually didn’t become a couple until many years later when we met a second time. Turns out we both had crushes on each other back in the day…
Because I had my son when I was only 19 years old, I never completed my theatrical studies at University. He became my number one priority, and I felt that I needed something more stable.
I loved writing as much as acting, and eventually somebody told me I should publish. I do it as a hobby and currently have 18 published books of various genres as well as numerous short stories, memoirs, poems and articles featured in compilation books, eMagazines, plus a local newspaper.
I also wrote a few articles about Ulcerative Colitis because I was diagnosed with the digestive illness back in 2009.
I find writing very therapeutic. Being around animals too, although I don’t have any pets aside from two goldfish. I do talk to them though. I used to have a cat named Persephone when my son was a baby but she was jealous of him. I also adopted two budgies a few years back. We did not replace them once they died.

At what age did you realize your fascination with books? When did you start writing?
I’ve been composing stories since I was able to write. My parents kept the collections of little books I created. I continued writing stories as a teen and young adult but never considered publishing anything until a friend of mine told me I should. I find the writing process very therapeutic and the fact that people want to read my stories gives me that extra motivation.

Who are your favorite authors to read? What is your favorite genre to read. Who Inspires you in your writings?
I support many Indie authors and read various genres.
My writing is usually inspired by life itself. I get a lot of support from my friends and family.

Tell us a little about your latest book?
I’ve been writing a lot of short stories back to back for an online magazine called Mom’s Favorite Reads eMagazine. My work, mainly inspired by life itself, was first featured in the January 2021 issue, and I’ve had stories or memoirs published in each monthly issue since.
I wrote a story called “I’ll Take You to See the Ocean,” which was originally inspired by a trip I took to the Magdalen Islands back in 2017. The heartwarming story about a windowed mother wanting to fulfill her five year old’s son to see the ocean ended up being a lot longer then intended. I just kept elaborating, feeling it needed those extra details and actions.
Although I probably could have published the story in the online magazine, split up in different issues, I decided to publish the story independently instead back in March.
I ended up doing the same thing with my short story “Hidden Secrets” in May, even though it wasn’t as long.
That one was meant to be set in Victorian times since I love that era, but once I started writing everything changed. The main character, Alice, finds old letter and diaries inside her grandmother’s old Victorian farmhouse which had being in the family for generations, but they date back to the 1930-1950. The contents end up revealing shocking secrets…