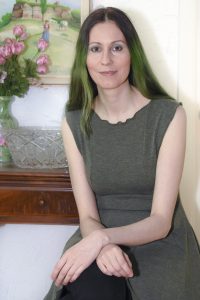 Tell us a little about yourself. Where were you raised? Where do you live now?
I’ve always been very passionate about the things that inspire me and I love to enter worlds and create. I am from the greater Montreal area in Quebec, Canada. I live where I was raised, not the same house, but I’ve always been homey and sedentary.

Carl Jung, the psychoanalyst, had imaginary people to whom he spoke to access his subconscious mind and to help develop his ideas and theories. I have plushies. I know, right. They are a part of me, alter egos, and it helps me to access my subconscious mind when I need to. Working the imagination, as strange as it can seem at times, is important to keep inspiration flowing and it helps prevent writer’s block. At least it does for me.

At what age did you realize your fascination with books? When did you start writing?
I’ve always enjoyed being in my head, daydreaming, lucid dreaming and fantasizing. When I was in high school, I would write silly and corny stories. A good friend of mine and I co-wrote a script-like story wherein we met our favourite singers and began dating them. It was the silliest thing ever, but good practice. I wrote a few short stories and just kept writing to practice as much as I could. In one of my English classes, I had to write a story and my presentation paper had as a pretend company name Binky Inc. Binky is one of my nick-names from childhood. Eventually, that became a real company name, Binky Ink.

Who are your favorite authors to read? What is your favorite genre to read. Who Inspires you in your writings?
I’ve always had a love for fantasy. I have three favourite franchises that have inspired me a great deal throughout the years. Star Wars and its original expanded universe is the first one. I was four years old when I saw A New Hope for the first time, so it’s been a great inspiration. Lord of the Rings and other books by J.R.R. Tolkien is another inspiration for me. The way Tolkien includes songs and other languages inspired me to put in some songs and invented languages into my stories as well. And of cour, I can’t forget my favourite video game franchise, Dragon Age. All those franchises have rich characters of various types, with various arcs. Analysing certain character arcs and Carl Jung’s archetypes has helped me develop some of my own characters.

Tell us a little about your latest book?
My latest published book is Stardust Destinies I: Variate Facing. It takes place in a realm known as the Great Ocean Valley, where magic is strong and prophecies are dictated by dragons.

The inspiration for the story, the characters and the world came to me in a dream. I actually dreamt of Chapter Nine, so I wrote that first, ad then developed my lore and characters. Then I wrote from the start up to that chapter, and then continued writing it, and then just kept writing. I had no idea Stardust Destinies would end up being a series at that time, let alone one that would contain ten books (at least).