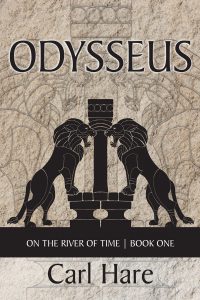 Tell us a little about yourself. Where were you raised? Where do you live now?
I was born and raised in Edmonton, where later I obtained two degrees in English from the University of Alberta. And with my late wife, I have lived in many places—Victoria, Vancouver, Saskatoon, Montreal, London and Paris. Now I live in Kelowna, BC. No pets here (allergies in the family) but all my life I have had dogs as pets until we went back to Edmonton. In Victoria we had a cockapoo. One day I had been rehearsing, and when I came back there was this puppy. “We’re going to call her Prometheus because that’s the play you’re doing,” announced the breathless family. “We can’t call her Prometheus, she’s female. She must be called Promethea.” And so she was. And when the children were called home for dinner, the neighbors heard called “Moira, Donovan, Kevin, Promethea!” Fortunately, they all came home.

At what age did you realize your fascination with books? When did you start writing?
I’ve loved books since I was a small child. My mother read to me and got a series of books for me. She even cut out and collected the coloured Walt Disney comics in the magazines or papers, carefully scotch-taped them back to back, then strung a shoelace through them and protected them with hardboard covers. I’m looking at them as I tell you this; they are now seventy years old. When I was old enough, I used to walk to the comfortable old library on the South Side of Edmonton and find each week new books from the children’s section. As I got a little older the series I loved was the one begun with The Wizard of Oz—there are at least forty different volumes, the first seventeen written by the originator, L Frank Baum, who really had the sharpest sense of humour. In my teens, it was pocketbook and pulp magazine time. From the first, I read all of the Perry Mason and Ellery Queen and The Saint series. From the second I was fascinated with Amazing Stories and similar sci-fi pulp magazines.

But the strongest fascination exploded a few days before I wrote my Grade Twelve exams. I happened to read a play by George Bernard Shaw, and I was ablaze with wonder and fascination at the power of his language. When I finished it, I took a breath, and then for a week, day and night, I read all fifty-four of his plays and prologues. There is an old acting saying: If you can play Shakespeare and Shaw, you can play anything in the repertory. It’s true.

Who are your favorite authors to read? What is your favorite genre to read. Who Inspires you in your writings?
Every time I write such a list, I tend to indicate different authors. But there are some that are always there. Shakespeare, Shaw, and Brecht, of course. But Yeats, and Seamus Heaney, and Sean O’Casey, and Dylan Thomas, P.K. Page, Lorna Crozier….

I don’t have one favorite genre. I’m still partial to sci-fi and fantasy, drama, and poetry as well. When I get time, I’m going to look at the great novelists of the past—George Eliot is one, and of course James Joyce. It all depends on mood and ambition—I actually read War and Peace.

Who inspires you in your writing?
There is no one writer that inspires me, with the exception, of course, of Shakespeare. I can admire writers and their craft, and can be moved, or exalted, or furious, or helpless with laughter from what they write. But what I appreciate in them is their fearless exploration. They educate me, but what inspires me in what I write is what I see around me, inside, outside, what I see people do, sense what they feel and think, how they and all of us interact, what holds this fragile bond together, and what comes into my mind and imagination that forces me to write, what to write, how to write it. And that can be both inspiring and exhausting, And worth it.

Tell us a little about your latest book?
It starts with an accident. Twenty-seven years ago I was on a tour of the Fringe Festivals with my son, who is a professional actor. I had directed him in a one-man show, Kings, based on the first two books of The Iliad as adapted by the English poet Christopher Logue. We had arrived in Winnipeg, and I discovered to my horror that I had run out of science fiction to read. Fortunately, there was an old bookstore next to where the Fringe was located. I went there, and by accident or fortune, came across The Collected Poems of Edmund Spenser. Now, when I was in English Honours I had to read some of Spenser but had read very little of his epic poem The Fairie Queene. And a forty-year tinge of guilt afflicted me, and I bought those collected poems. I did read the whole epic; but I also read his biography. In it I discovered to my astonishment and horror that while he was writing his epic, which deals with the great virtues, he was also writing a treatise essentially advocating the genocide of the Irish. What was I to think? Here was one of the greatest poets, speaking with the tongue of angels, simultaneously holding in his mind the virtues and genocide.

And I have been pondering this for the last twenty-seven years. My present book, Spenser, is the second book of a poetic trilogy, On the River of Time. The trilogy covers a span of 3,000 years and deals with the struggles of three men. The first book, Odysseus, relates the second voyage of the hero, forced on him by the god Poseidon. Book Two, Spenser, describes the last four months of his life and his memories of the past. Book Three, Archer, begins in 2005 and describes the journeys of Ray Archer, actor and director, who leads his company across the country in King Lear and is also collecting material for a gigantic production of all of the history of this country, which is created and performed in the second part across the country again, and then is invited to tour in Ireland, with which the third part is concerned. This last volume is in draft form at the moment.

Above and beyond the plots, the plays also contain multitudes of characters who are well known: in Book One, Odysseus’ family, veterans and others involved in the Trojan War, including Menelaos, Helen, Orestes, Electra; in Book Two, Queen Elizabeth, Walsingham, the Earl of Essex, Walter Ralegh, and many others. Book Three will have familiar figures as well, but you will have to wait until publication.