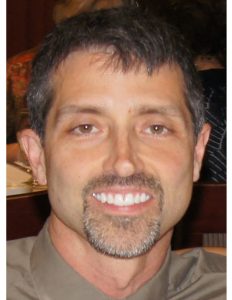 Tell us a little about yourself. Where were you raised? Where do you live now?
Charles Surowiec was born in Orlando, Florida. His family relocated to Los Angeles, California where he began school, but most of his childhood was spent in a small town in Upstate New York. He was an altar boy for many years and had the distinct honor of serving mass with Bishop Matthew Clark on a few occassions. He graduated summa cum laude from the University of Buffalo with an Electrical Engineering degree. He obtained a Master’s degree from the University of Rochester, and has a published thesis on chaos theory and particle detection. He still resides in Upstate New York with his wife, three children, and a yellow lab named Odin. In his spare time, he enjoys reading, traveling, and training for triathlons.

At what age did you realize your fascination with books? When did you start writing?
Unfortunately, I did not start to love books and reading them until I was twelve, and by then I was way behind the “curve”. It took me many years to improve my reading comprehension and speed. I have always dabbled in short story writing since high school, but I was never interested in writing a novel until three years ago. When CoVid began and everyone started hunkering down at home, my family embarked on an amazing journey. I read a short story to the kids that I had written in college one night when we were looking for something to do, and when I finished the kids asked, “What happened next?” I spent the next twelve months creating a 400+ page answer to their question. During the process, the kids and my wife participated constantly, first as Alpha Readers, then Beta Readers, and they even helped to decide the names of some of the characters. Drawing on their individual talents the kids supported the book in other ways as well, my oldest daughter drew cover art samples, my son designed NFT characters and is marketing them, and my younger daughter made TikTok videos.

Who are your favorite authors to read? What is your favorite genre to read. Who Inspires you in your writings?
My favorite genre is fantasy, and within fantasy (Epic and Dystopian). I enjoy reading Tolkein, RA Salvatore, T Brooks, L. Bardugo, and S. King.
My inspiration comes from my family. They have been on the journey with me from the beginning. Alpha & Beta Readers, marketing assistance (on Tik Tok, Twitter, and Instagram), and even helped with the cover art.

Tell us a little about your latest book?
This is a “Chosen One” trope, and Cymm Reich possesses a rare, magical aura that hasn’t been seen in a millennia. However, he wasn’t actually selected by luck, or by fate, or by ancestry. He has made a conscious decision as a young man to protect a creature that is being bullied and likely to be killed. As a result, he puts his own life in jeopardy, and the creature imbues him with this power to save them both.
Cymm does not realize he has this power until many years later, but the gods already know. The first god, Terazhan, sends a dwarven cleric to validate this, and begins training Cymm to become a holy warrior in his name (a Paladin).
Sixteen-year-old Cymm Reich, returns home to find his family massacred and village razed. An internal battle rages between remaining true to his beliefs and his growing need for revenge. While Cymm struggles to discover himself and his place in the world, he is tempted by evil and follows a path driven by vengeance.
As Cymm’s fears and self-doubt escalate, the benevolent Terazhan offers him a glimmer of hope to defeat the dragons responsible for murdering his loved ones. However, a dark secret entwines this gift of power, and the chain of events set in motion could change the history of the world forever. Meanwhile, a priestess named Lykinnia has captivated Cymm. Her intellect is superior to the gods themselves and has other plans for Cymm and his righteous powers, but she must deal with her own unique issues and challenges.
Invaluable friendships and enemies are made by an upstart Cymm on his epic quest to slay the dragons.