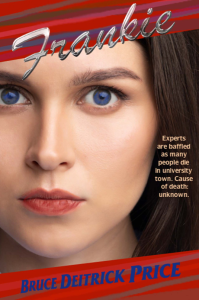 Tell us a little about yourself. Where were you raised? Where do you live now?
I grew up in Virginia Beach, went to great schools, and was mainly interested in the arts. But I always had a love of science, 40 years ago I saw an ad in a small magazine for a robot that could supposedly talk to customers at trade shows. I was fascinated by the claims. I got an assignment and took a bus to Newark. I went to a large warehouse and was greeted by a somewhat ominous machine.
Thus began a long relationship with robots. Four years ago I dreamed about a woman walking on the other side of a highway. There was something odd about her. I guessed: is this a robot? I loved the ambiguity. I woke up with a decision that I would write a novel about this woman. Frankie.

At what age did you realize your fascination with books? When did you start writing?
I began at 15 and knew at 17 that I would go to New York to be a novelist. I had a lot of miscellaneous talent and creativity, but was never very professional about my profession. I went in one direction, and then another, depending on what caught my attention. I’ve done a lot of experimental writing and painting. This is where you introduce chance and confusion into the creative process, in the hope you can reach a new level of creativity. I’ve also written the carefully plotted and planned novel. Much safer.

Tell us a little about your latest book?
OK, I’ll brag. Some people who know me found out I wrote a book about a robot and immediately assumed the lowest common denominator. That’s annoying so I will mention that it’s the least common denominator. Simon meets Frankie and immediately falls in love. He thinks that she is spiritually advanced. This is on the jacket copy. I wanted people to think away from clichés. My book is about the eventualities that nobody thought about.