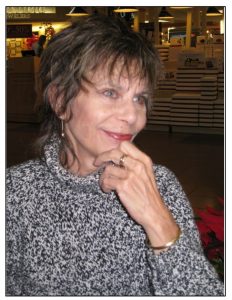 Tell us a little about yourself. Where were you raised? Where do you live now?
I was born in Manhattan, and raised in the suburbs of NYC. Not being a fan of New York (or SNOW), in 1968 I began the first phase of my westward migration, which took me to…Chicago — and I thought New York had cold Winters!

In 1973 I said a final, if not fond farewell to frigid weather, and moved to the place that inspired Mark Twain to proclaim “The coldest winter I ever spent was a summer in San Francisco”. The city of San Francisco, long ago dubbed “THE City” by its hyperbole-inclined inhabitants, is certainly not as cold as Chicago but it was also not nearly warm enough for me, so, in 1986, having run out of “west”, I migrated south, and exchanged “THE City” for “The City of (fallen) Angels” aka Los Angeles (decidely warmer, but also distinctly surreal!)

Ten years of Hollywood proved to be more than enough for this girl so, in 1996, I said goodbye to “LA LA Land” and relocated to the relative sanity of Oregon. Not long thereafter, I began a tedious and not terribly amusing battle with Breast Cancer. Today I am finally Cancer-free…”boobless”, but Cancer-free!

A list of my 4-legged family members includes “Luna” (aka “Lunatic” or “Moose”) — a large, charming and goofy Golden Retriever who has never met an ANYTHING she couldn’t eat! Our house is also home to “Gypsy”, an almost reasonable facsimile of a dog of dubious lineage, and “Demon Cat” (aka “The Floor Weasel”) — an alleged “feline” who couldn’t care less what anyone calls him, as he can be counted on to ignore whatever name he is given.

In addition to writing books and screenplays, I am also the Meme Maven of Camp Meme-A-Day (Facebook.com/@CampMemeaday), and the owner, creator, and designer of THE CARD OUTLET (zazzle.com/thecardoutlet) — the online home of my alter ego, Ima Crone, the Gypsy Crone Queen of Snarklandia, and CardBard Greetings (cards for all seasons and all reasons) — sweet, snarky, tender and twisted! When you’ve got something to say, CardBard Greetings has an amusing way to say it!

I donate a portion of ALL proceeds from the sale of EVERYTHING I do, including my Greeting Cards and my new book, “WHY ARE THERE MONKEYS? (and other questions for God)” to The Breast Cancer Research Foundation.

At what age did you realize your fascination with books? When did you start writing?
I began writing at the age of two, although my early “writings” bore a striking resemblance to indecipherable doodles.

Who are your favorite authors to read? What is your favorite genre to read. Who Inspires you in your writings?
When I’m not writing, I’m a voracious reader. I’m particularly fond of Tom Robbins — his decidely “twisted” brain invents fabulous characters and fantastic stories and his use of language is a marvel to behold! I adore Ray Bradbury’s work for the same reason. While I tend to gravitate toward Biographies, (though you wouldn’t know that based on my fascination with Bradbury and Robbins), I am also drawn to Historical Fiction and the magical work of the late, great Sir Terry Pratchett.

Tell us a little about your latest book?
“WHY ARE THERE MONKEYS? (and other questions for God)” is the absolutely TRUE, deeply INSPIRATIONAL, laugh-out-loud FUNNY story of my Near-Death Question and Answer Session with God, and if you think a conversation with God couldn’t possibly be FUNNY, you’re in for a BIG surprise!

As a Los Angeles and San Francisco Radio Personality, I interviewed more celebrities than I can count (Robin Williams, Mel Brooks, and Bob Hope, just to name a few), but the most AMAZING interview I ever conducted occurred after I DIED and suddenly found myself interviewing God!

Being a journalist, I refused to discuss my “Divine Experience” with anybody, unless I could get PROOF that it had REALLY HAPPENED, and that’s EXACTLY what I got…and it was PROOF that NO ONE COULD DENY!