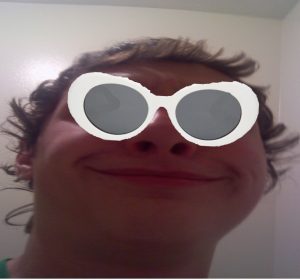 Tell us a little about yourself. Where were you raised? Where do you live now?
Hello there, my name is Brandon Tolin and I am a novice author from Denver Colorado, I was born at Swedish medical hospital and have lived in Denver with my family ever since. I have a feisty cat named mac and a feisty dog, a chihuahua-pug mix as well.

At what age did you realize your fascination with books? When did you start writing?
I have been fascinated with books all my life, as a youngin, or should I say younger youngin because I am only 19 years old lol I ate up every goosebumps and scary stories to tell in the dark books that I could get my grubby, sticky, gross little kid hands on. Eventually, I grew to love horror science fiction, and horror novels in general since I read Jurassic Park for the first time in the sixth grade. I went on to read many more of Micheal Crichton’s novels and quite a few of Stephen King’s as well over the years.

I started writing when I was around fourteen, its something I took up as a hobby when I was bored, and soon after I gave up on the said hobby, a few years later when I was sixteen I decided to pick up where I left off and I began writing one-off stories, unfinished drafts, random little pieces of nonsensical nothings until I came up with the idea for my first novel. I started writing the first novel early in 2017 then gave up on it until I came back to it at the end of 2018 I finished my first draft halfway through 2019 and I have been editing and rewriting it here and there ever since until I finally published it back in October of 2020. A few months before in August, I was inspired by a monster encounter I had seen on youtube in the vein of Bigfoot, Nessie, and the like. It was then I began writing my proudest work, a short story based on the events of a trapper named Bauman, who allegedly saw a bigfoot type creature during a trapping expedition and president Theodore Roosevelt later met the trapper and recorded his account in his book “The Wilderness Hunter” Since writing said novel and said short story I have grown to realize I love crafting historical horror stories involving cryptozoology and other popular monsters.

Who are your favorite authors to read? What is your favorite genre to read. Who Inspires you in your writings?
I am a huge Micheal Crichton fan and of course, I also love the work of Dean Coontz, Stephen King, and Clive Barker to name a few. I love reading about history, I am a history fanatic and devour anything related to a historical time period I am interested in. I also love any book involving Cryptozoology as it’s another deep-rooted passion of mine since my childhood. I am inspired mainly by history, history has so much inspiration and creativity to give if you simply dare to look. A lot of what I write comes from historical events I have read about, true and exaggerated. I am also inspired by B-movie and B-movie Creature Feature writers and directors as they inspire me to conjure new stories involving monsters, a genre I love deeply.

Tell us a little about your latest book?
My latest book is something a little different than what I have written before, it’s not particularly a project I took seriously. It was based on an idea I had in a dream after watching Jurassic Park lol. It was an absolutely ridiculous and cheesy dream that I couldn’t help but craft into a short story. I am proud of it but I do not think I will be creating anything as cheesy and crazy in the future. It is a story about well…….dinosaur human hybrids living in underground tunnel systems beneath the United States, if that insane premise is something you are interested in then you will love the whacky so bad its good nature of my latest work. My latest short story took me about a month to write and a week to edit and rewrite. My novel took me around three or so years of off and on work and my first publication took me about three months to write, and two months to edit and rewrite. If your into cryptozoology or weird western settings you will love my novel and short story.