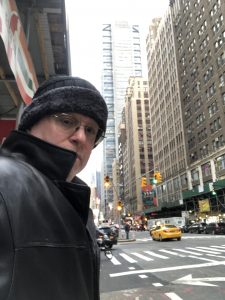 Tell us a little about yourself. Where were you raised? Where do you live now?
I’m a native New Jerseyan. I’ve spent most of my life in Jersey, but did my undergraduate degree at the University of South Carolina, and several years ago spent a year at the University of Maine at Farmington on their Creative Writing faculty. Coco, our family’s shih-Tzu, never criticizes my work. She also never reads it, but what’re you gonna do?

At what age did you realize your fascination with books? When did you start writing?
My parents were heavy readers so I took to books when I was quite young. After my mother threw out my comic books because she said they were giving me nightmares, I started reading their book so by the age of 10 I was reading adult novels. I don’t remember when I started writing; maybe junior high, but it was just messing around. I had no serious goals. That wouldn’t happen until I got to college and I discovered this was something I wanted to do.

Who are your favorite authors to read? What is your favorite genre to read. Who Inspires you in your writings?
While I have favorites (George V. Higgins, John LeCarre, Evan Hunter, Steinbeck, others) it really is catch as catch can. I’m an opportunistic reader: one of my daughters brings something home, I find a book laying around at the schools where I work and it seems interesting or I’ve heard about it, I’ll scoop it up. Inspires, that’s a tough word. There are writers whom I’ve learned from (I named a few above to which I would add Thomas E. Kennedy whom I was lucky enough to have as an instructor when I went for my MFA a few years ago), and others where I’ve admired how they’ve navigated their careers (Hunter doing literary work and screenwork under his own name, crime stories as Ed McBain).

Tell us a little about your latest book?
It began largely as my own response to being a young man working in Manhattan in the early 1980s, a bit overwhelmed by the crazy, scary, exciting stuff that was going on. As the years went by and I would work, rework, revisit the novel, I realized that at one point it was going to become sort of a nostalgia piece for me, revisiting a NYC that had since calmed down and sanitized itself. While it’s not in any way autobiographical, the main character — Ronnie — is seeing NYC as I saw it. In fact, many of the events and overheard conversations Ronnie is party to I witnessed in my time in the city.