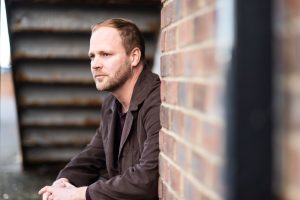 Tell us a little about yourself. Where were you raised? Where do you live now?
I'm an author, journalist, lecturer and performer. I'm a former Daily Telegraph journalist and write on travel, family and environmental issues. I've authored several travel guidebooks on destinations from Ecuador, Galapagos and Peru to London. I combine freelance writing with lecturing at University of Brighton in the UK.
I'm also an experienced musician and have released two albums as a singer-songwriter.
I'm from south-east England and moved back here after living in London and South America.
I have a cat named Marmalade, who makes a cameo appearance at the end of my book!

At what age did you realize your fascination with books? When did you start writing?
I read the Lord of the Rings trilogy when I was 11 and then started writing short stories. I got involved in journalism as an undergraduate. I later moved into travel writing but it's taken me until now to start writing fiction. The pandemic gave me the time at home to write a novel, which was one upside to an otherwise difficult time.

Who are your favorite authors to read? What is your favorite genre to read. Who Inspires you in your writings?
I love fast-moving book so I like thrillers. I also like books that have something important to say.
I admire George Orwell, John Le Carre, JK Rowling, Terry Hayes and in non-fiction Eckhart Tolle.

Tell us a little about your latest book?
Green Shoots is an eco-thriller – it’s a crime thriller with an environmental focus set in Britain and South America. In the story, a man determined to solve the mystery of his wife's death finds himself drawn into a lethal plot.
The main character grieving journalist John Adamson is brought back from the brink of suicide by a mysterious phone call informing him that his wife Christina’s death in Ecuador was not what it seemed. John is desperate to find out what really happened to her, but is persuaded by the man on the phone to also investigate a series of murders of businessmen in London. The deaths seem connected to industries that exploit the rainforest where Christina was researching – oil, timber and cattle ranching. John has to work out the connections between these killings and his wife’s death, but it’s both difficult and dangerous.
Towards the end of the book, the antagonist says: “The greatest battle of this century is between extractionists and ecologists.” That is the central theme of the novel – the conflict between those who plunder and those who defend the Earth. I think I channelled my anger at what's happening in the world when I created the antagonist. However, the book does have an uplifting ending, as I think it's important to be hopeful and find solutions.
I wrote the book in nine months over Covid lockdown in Britain.