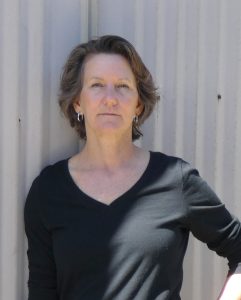 Tell us a little about yourself. Where were you raised? Where do you live now?
Hi there. I'm an adrenaline junkie raised in the Midwest, where I learned to water ski, ride skateboards and road bikes during the summer, and ice skate and cross-country ski in the winter. After college, I moved to Los Angeles and enjoyed meeting new friends from around the world. For a time, I traveled internationally, and later worked as a raft guide. I currently reside in northern California with my family and German Shepherds and can often be found dreaming up a new thriller on the hiking trail.

At what age did you realize your fascination with books? When did you start writing?
I frequented the silver bookmobile as a child, deciding I wanted to be a writer someday. That day came in my early fifties after a health scare, when I realized it was now or never! I wrote my debut, VANOPS: THE LOST POWER, in about two years and it took several more years to find an agent and publisher. When it won three awards and released as a Barnes & Noble bestseller, I was over the moon.

Who are your favorite authors to read? What is your favorite genre to read. Who Inspires you in your writings?
I’m a big fan of action-packed global thrillers that delve into ancient mysteries with the potential to impact present-day society. Dan Brown, James Rollins, Steve Berry, JF Penn, and Ernest Dempsey are a few of my go to authors. I also like a well-written domestic thriller and Gregg Hurwitz is my fave author in that genre.

Tell us a little about your latest book?
CLEOPTRA'S VENDETTA was my pandemic book. It's a standalone thriller or may start a new series. I researched for months before I started to really dig into the writing. I loved learning about Cleopatra and what a strong, powerful woman she was. Most people are familiar with her suicide; this story starts when her death begins. Her revenge is carried out in the present day by estranged couple Tim and Angie Stryker, who haven't been seeing eye to eye since the loss of their infant son. Angie's turned to the bottle to grieve, which doesn't work for Tim because of a tragic childhood incident involving his drunk father. They go on a holiday to reconnect, but Angie and their four-year-old daughter get kidnapped. To get them back, Stryker and his team of military misfits have to track down Cleopatra's ancient gold journal, as it holds the key to the location of the kidnappers.
It's a fun action-packed story, filled with twists and unexpected messages. I'm honored that it won two awards and has been racking up critical acclaim. Readers can watch a trailer on my website.