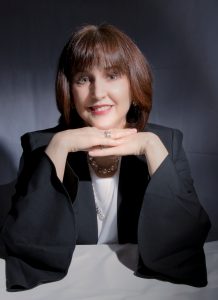 Tell us a little about yourself. Where were you raised? Where do you live now?
When I’m not wearing my story-telling hat as Anne Armistead, historical romance author, I’m Sandra Havriluk—English teacher, wife, and mom of two grown daughters and a rescue mutt named Jackpot. I am a native Georgian, born in Rome, Georgia and raised in Decatur, Georgia. My husband and I live in a northern suburb of Atlanta called Peachtree Corners. I earned my English literature degree from the University of Georgia and my MFA in Creative Writing from Spalding University. I am a member of the Romance Writers of America (RWA) and the Georgia Writers of Romance (GRW), and the National and Georgia Sisters in Crime (SinC) organization. My love of storytelling came naturally from my daddy, who spun tales of his growing up in the Depression-era South. I cherish a collection of his hats, which I believe brings me a touch of his storytelling magic. Dangerous Conjurings is my debut historical paranormal romance published by Soul Mate Publishing and available on Amazon. Under the title Treacherous Hearts, it was the winner of the 2014 YA Fab 5 Wisconsin Romance Contest.

At what age did you realize your fascination with books? When did you start writing?
At age five, I marveled at the first book I held in my hands that had words on both sides of the page with NO pictures. It was one of my mother’s original Bobbsey Twins from her childhood. I couldn’t wait to be able to read it all by myself, and soon I was doing just that.

From that point forward, I was an official bookworm, plowing through every book I could get my hands on and choosing English as my college major and teaching English as my profession. I knew one day I wanted one of my books in the hands of readers! Growing up, I wrote little stories to act out, wrote (terrible) poetry as a teen, and outlined many stories that I got half-way through but never finished.

I started writing again with more determination and dedication after my daughters launched into adulthood. I finished my MFA in Creative Writing, and I have written multiple manuscripts that
have never found a home other than in my desk drawer.

I am so proud that I have reached my dream of being a published writer with Dangerous Conjurings being released April 2018 with Soul Mate Publishing!

Who are your favorite authors to read? What is your favorite genre to read. Who Inspires you in your writings?
I love to read in so many genres, including contemporary romance suspense, historical romance, anything Gothic-y. I gravitate toward stories with worn-weary introspective protagonists facing twists and turns of conflict.

Growing up, I adored Victoria Holt and classics such as Little Women, all Nancy Drew and Hardy Boys, Anne of Green Gables.

I find my writing leans toward the Southern Gothic voice, and of course, that means I love Flannery O’Connor and anything Faulkner!

Tell us a little about your latest book?
Dangerous Conjurings is a Gothic-y historical paranormal romance. (That’s a mouthful!) I wrote the first scene for it as an assignment for an MFA workshop scene that included supernatural elements. One bit of advice beginning writers receive frequently is “write what you know,” so I set this scene in the South against the backdrop of post-Civil War. All that came to me was my protagonist Leah running toward a river, grief-stricken over the loss of her infant brother. I had a snatch of an idea about having a hoodoo conjurer, a fertility spell, a caulbearer birth, and a ghost with mis-matched eyes all playing a part in this story that began forming as part of this scene.

Ten years later, my story is now published as Dangerous Conjurings! It went through two other title names, The Secret of Elijah and Treacherous Hearts, before Soul Mate accepted it to be published under Dangerous Conjurings. The story went through multiple rewrites, as well, with the ghost being eliminated (Faulkner is quoted as advising writers they must “kill your darlings”). The ghost was too much in an already hoodoo-voodoo laden storyline, but I’m hoping he’ll make an appearance in another story of mine.

While writing this story, I disappeared into the research rabbit hold for periods of time, while digging into the New Orleans voodoo underground of post-Civil war times and the life of the Voodoo Queen Marie Laveau along with tarot card readings, hoodoo hexes and spells, and the suspicions surrounding caulbearers (babies born with the birth sac covering them). I ordered so many interesting reference books about such topics that my lovely Barnes and Noble sales clerk finally asked me “just what are you working on?” I did worry about something happening to me, and CSI studying my google history to try to solve the mystery!

My story was finally honed into a suspenseful historical romance with the tagline: Desire, Betrayal. Fate. Can love conjure all?

Set in the South against the backdrop of post-Civil War, the story begins with HAJILE BE…the fertility spell chanted by the hoodoo conjurer Kali Despierre. Hers is a dangerous conjuring that brings murder, kidnapping, and evil spirits into the life of 18-year-old Leah Sullivan. Leah finds herself in a race against time to rescue her kidnapped infant brother Elijah, stolen by the conjurer who believes her spell created him and who plans to sell the babe into the New Orleans’ Voodoo underworld of Queen Marie Laveau. Accompanying Leah on her desperate quest is war veteran Marcus Quinn, a mysterious stranger who has captured Leah’s heart. The couple’s passion heats up while sleeping under the stars only inches apart and surrounded by peril. However, through a cruel twist of fate, Leah discovers the devastating secret about Marcus’s past that breaks her heart and jeopardizes her brother’s rescue. Will Leah’s love for Marcus be powerful enough to overcome his betrayal? Or will dangerous conjurings doom their future together?