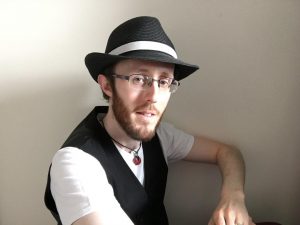 Tell us a little about yourself. Where were you raised? Where do you live now?
Born in 1986, I am a devoted writer, musician and multilinguist who splits his time between Glasgow, Scotland and Maidstone, England. I believe that each and every one of us has a story; a deep passion that can guide us on a journey of self-discovery and growth towards the life we really want. In this respect, I’ve just authored “Folk Springs Eternal”, a folk-punk music novel about four musicians with a dream…and how their success will help you find yours!

In my twenties, I struggled to break the mental hold that the scripted, 9-to-5 lifestyle has over many of us. Now, I still work an office job, but with reduced hours, which pays the bills but frees up the time and energy required for my written and musical work. My writing conveys a positive, yet practical message to assist others in identifying their own passion, getting the right people on their side, targeting their audience correctly, and getting paid to do it.

I live with Kerstin, my amazing wife. We speak English and German, sometimes in the same sentence. We’re also learning Scottish Gaelic together.

At what age did you realize your fascination with books? When did you start writing?
The first author whose books captivated me was actually R. L. Stine, with his “Goosebumps” series. This man was the first to give me a sense of the dramatic, the suspenseful and the spine-chilling. In my teens, I graduated to Stephen King, whose imagination and irreverent literary style I praise highly – “The Shining” and “Dreamcatcher” are fine examples.

However, I’ve also drawn inspiration from some more classical, 20th-century works such as “Nineteen Eighty-Four” (Orwell, of course) and “The Purple Plain” (Bates). A somewhat volatile mix, but one that has guided my own output from its creative-writing origins in primary school right through to the present day.

Who are your favorite authors to read? What is your favorite genre to read. Who Inspires you in your writings?
My favourite English-language authors are currently Stephen King, George Orwell, H. E. Bates and various other, lesser-known authors (e.g. Joseph Coohill and Joe Barnes). All of these have inspired my own literary style to one extent or another. In German, I quite liked “L’Adultera” by Theodor Fontane when I read it at university, and Voltaire’s “Candide” was an interesting, black-humour ride.

In terms of genre, that’s a tough one! But I’m going to pick horror.

Tell us a little about your latest book?
Gus, Lin, Herman and Rash are four talented musicians playing Irish and Scottish music with a punk twist. They’re nonconformists who’ve found their passion, but how will they make their dreams of big success a reality? Especially when scepticism, hostility and even physical violence are to beset their path?

The band must either persevere through the fire and emerge victorious . . . or fail and self-destruct among the flames. This stirring and suspenseful musical ride will appeal to all nonconformists, especially those with their own burning passion and the courage to pursue it. An action plan at the end of the book equips readers with the tools needed to find success and to withstand setbacks and failures.