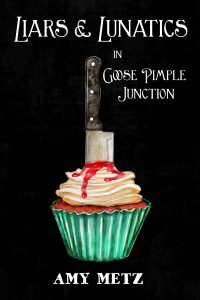 Tell us a little about yourself. Where were you raised? Where do you live now?
I’m almost a life-long Louisvillian. We moved here when I was six, and I’ve lived here since then except for my college years and three years after that. I live about five minutes from the house we lived in when I was in elementary school. I am currently dogless, but I do have two awesome granddogs and three grandcats.

At what age did you realize your fascination with books? When did you start writing?
I’ve always liked to read, but I didn’t become a voracious reader until 2007 during a tumultuous time in my life. I used books to escape life. Then in 2009, I started writing books to escape life. My first book, Murder & Mayhem in Goose Pimple Junction, was based on two murders in my family’s history—one of them being a cold case murder. I grew up hearing stories about the murder and always thought someone should write a book about it. It really saddened me that the murder was never solved, so I solved it fictionally.

Tell us a little about your latest book?
Liars & Lunatics in Goose Pimple Junction is book 5 in the Goose Pimple Junction mystery series. It’s about liars, narcissists, and greedy people. It also has some quirky people like Special Kaye, who lies whenever she opens her mouth. There are some murders, some hijinks, some romance, and as always, some laughs.
An ex-boyfriend of mine may (wink) be the inspiration for the main character. But anyone who’s ever had a narcissist in their life will recognize this special kind of liar.
This book took me over two years to write, and it’s been three years since the fourth book in the series was published. A health issue, recovery, and a broken heart got into the way of writing. Life happens. I hope readers will be happy to catch up with the folks of Goose Pimple Junction.