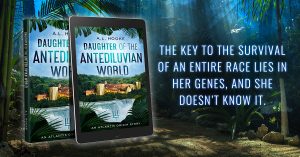 Featured Interview With A. L. Hooke

Tell us a little about yourself. Where were you raised? Where do you live now?
I grew up in Berks County, Pennsylvania (about an hour outside of Philadelphia). Living so close to the Poconos, I grew up with a deep love of the outdoors, which turned into an unquenchable wanderlust as I got older. I went to Pitt (H2P!) and lived in Pittsburgh for several years before escaping the gloom for the sunny south.

I now live in Raleigh, NC, with my very tolerant husband. By day I’m the COO of a small digital marketing agency downtown where I focus primarily on content marketing and consulting but still spend every spare moment I can outside. When Chris and I aren’t traveling, hiking, paddling, or otherwise exploring, I’m writing (or reading).

At what age did you realize your fascination with books? When did you start writing?
I have been a bookworm my entire life, and I spent years as a journalist and copywriter before lacing up my hiking boots and venturing into the dense jungle of fiction writing. I have always loved writing and have written in various capacities over the years. I developed my first character in the third grade and spent much of my young (and not so young) life in Pennsylvania dreaming of ancient civilizations and lost treasures.

My debut sci-fi action-adventure novel, Daughter of the Antediluvian World: An Atlantis Origin Story, is my first adventure in fiction, and I have to say, I’m hooked! There have been enough requests for a sequel to Daughter that I might just have to spend more time in Atlantis, but there are a lot of other mysteries out there that I’m itching to unravel!

Who are your favorite authors to read? What is your favorite genre to read. Who Inspires you in your writings?
Oh, this question is always tricky. I’m a bit of an agnostic reader; I’ll dig into any from hard science fiction and technothrillers to fantasy, thrillers, and mysteries. Daughter of the Antediluvian World is a bit of a nod to my unwillingness to commit to one genre – it’s primarily an action-adventure sci-fi story, but there are elements of mystery, mythology, and yes, even a little romance weaved through.

Some of my favorite writers, who have inspired me over the years to pursue my love of fiction, all seem to live in this “in-between space” with me. Michael Crichton, A.G. Riddle, Dan Brown, and James Rollins are likely all partially responsible for my writing style. Still, I also love a good laugh with Christopher Moore, a little darkness and intrigue from Neil Gaiman, and stories to quench my wanderlust by travel writer J. Maartin Troost.

Tell us a little about your latest book?
The concept for Daughter of the Antediluvian World originally came to me in college. I was taking an Introduction to Mythology course as part of a communications minor, and it reignited a long-time love I had for Greek Mythology growing up. So, this story started brewing and – of course – changed quite a bit over time. (Spoiler Alert: There are no Greek gods in DOAW.)

As I started writing I just couldn’t seem to get the fantasy aspects of the story to jive with what I knew about the world – I tend to be a very logical thinker – so magic became science. (Because really, aren’t they the same thing?) The concept of an action-adventure story really developed as I got a bit older and started doing more traveling. I’ve mentioned that U have a severe case of Wanderlust – I want to see the world. The places in the book are a few at the top of my list, so getting to research them and visit them through the process of writing the story was thrilling.

Because of the technical nature of the story, there was a ton of research to be done. So, the process was not a short one – this book is nearly two years in the making. Researching and outlining the story took nearly as wrong as writing it, and when it finally came time to put the story on paper I would sit for an hour or two every morning before work and just get as much of it out on paper as I could. It took so much of me to develop my characters and take them on this adventure and I wanted to do it right, but I think I could probably repeat the process in less time now. For the sake of the readers who are hoping for another glimpse into the lost city of Atlantis, I hope so!