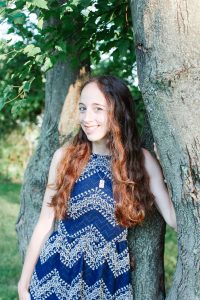 Featured Interview With A. Kidd

Tell us a little about yourself. Where were you raised? Where do you live now?
I grew up in Toledo, OH, which is often considered the heart of it all. I went to college in Michigan, earning a B.S. in Written Communication with a minor in Language, Literature, and Writing from Eastern Michigan University and an MLIS with a specialization in children’s librarianship from Wayne State University.
My poetry has been published in literary magazines. I am also an artist and a performance poet. In my free time, I enjoy finding and hiding painted rocks in my neighborhood and going on adventures with my family and friends.
I currently live with my husband and daughter in a suburb of Detroit, MI. We have many pet rocks. The Healing Star is my debut novel. I often wish on stars but haven’t caught one yet.

At what age did you realize your fascination with books? When did you start writing?
I am the middle child in a family of three girls. I started making up my own stories at age four. Because I couldn’t yet write, my mom wrote the stories down for me while I painted the pictures. My first story was called Wagland and featured an island community with sea creatures that ate tuna fish sandwiches. I attended a young author’s conference several times in grade school and wrote my first picture book as an assignment for Spanish class in high school. I guess you could say I’ve always been writing.

Who are your favorite authors to read? What is your favorite genre to read. Who Inspires you in your writings?
So many! In no particular order: Sharon Creech, Grace Lin, Kate DiCamillo, Avi, Polly Horvath, Katherine Rundell, Philip Reeve, Paul Stewart, J. K. Rowling, E. L. Konigsburg, Philip Pullman, Jandy Nelson

I especially like reading middle grade and young adult fantasy, including dystopian. I also like steampunk, magical realism, light sci-fi, and novels in verse.

I’m inspired by J. K. Rowling for writing such an epic story with a fully-developed world, for persevering despite obstacles, for being a great female role model, and for getting kids to read long stories.

Without a doubt my biggest inspiration is Toni Morrison. Her use of symbolism is really quite genius. Sharon Creech is also one of my favorites, particularly the book Heartbeat. That’s when I became a fan of novels in verse. I admire her use of poetic language. To that end, I’m also a fan of Jandy Nelson’s I’ll Give You the Sun and Francesca Lia Block’s Weetzie Bat series.

Tell us a little about your latest book?
Stars with healing powers are falling from the sky.

My middle grade light fantasy for grades 3-6, The Healing Star, will appeal to readers of Where the Mountain Meets the Moon by Grace Lin, Keeper by Kathi Appelt, and Savvy by Ingrid Law.

Feisty fourth-grader Julia’s best friend in the entire universe is her grandmother. Julia and Grammu share secrets while cooking soup together, stay up late eating junk food and watching scary movies, and go stargazing on Blackberry Hill. They even wish on the same star every night.

But everything changes when Grammu catches the disappearing disease: little by little, she’s turning invisible. If Julia can catch a falling star, then her wish to save Grammu will come true. All Julia needs to do now is find the legendary ladder to the stars…

This novel took me about a year to write, but several years after that were spent revising based on reader and writer feedback. The character, Grammu, is slightly based on my own grandmother, which makes the story near and dear to my heart.