You are here: Home / Books To Read / FAQ New Believers Want to Know (And Every Believer Needs to Know 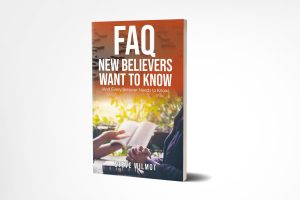 About FAQ New Believers Want to Know (And Every Believer Needs to Know:

Would you hand the keys to the family car to your 6-year-old daughter?
Would you throw your three-month-old son into the pool to see if he can swim?
Would you expect your newborn baby to fix their own bottle and their change her own diapers?
Stupid propositions, huh? And yet that’s what we do with new believers too often. We pat them on the back and congratulate them on their decision to follow Jesus. Then… we leave them to figure out their next steps on their own.
Then we’re surprised so many who put their faith in Jesus don’t stick around very long. They’re here today, gone tomorrow. Their decision to follow Jesus was sincere and heart-felt, but no one helped them grow the relationship with him they began. They return to their old lives because no one took them under their arm to show them how to grow and successfully navigate their spiritual journey. To warn them of the obstacles they’ll face down the road and equip them to deal with them. They were abandoned to figure out everything on their own.
That’s the reason for this book. It’s my attempt to spread the word to as many people as possible that we’re dropping the ball. Our commission is not just to win people to Jesus, it’s walking with them and helping them learn how to grow and mature in their faith and relationship with him.
FAQ New Believers Want to Know sounds a warning siren to awaken the Church to this neglect of new believers, but it also provides several basic truths that lay a solid foundation new believers can build upon as they progress on their spiritual journey. It is ideal for:
** New believers to read on their own
** New believer classes
** One-on-one mentoring with a mature believer going through the chapters with a new believer
** Small group study
** Believers who are returning to their faith after leaving it for a while
** Older believers who never learned the basics when they were new believers
** Older believers who want a refresher on the basics of a closer walk with Jesus
Discussion questions for each chapter are included for personal reflection or group interaction.

Steve Wilmot’s passion is to encourage and inspire Christ-followers on their long and sometimes treacherous spiritual journey Home. Over the years, he learned valuable lessons from his own journey of faith and developed indispensable relationships that kept him from giving up when the road got difficult. His purpose in life is to pay it forward whenever he can — first as a pastor for 40 years and now as a writer and mentor.
Steve married his college sweetheart, Becki, in 1974. She supported Steve — and sometimes served as his anchor and cheerleader — during their years leading churches from 1976 to 2012. They have four grown children and eight grandchildren. He retired from his bi-vocational role as pastor and mail carrier for the United States Postal Service. Along with novels, spiritual growth books, and devotionals, Steve writes a weekly column, “Pastor’s Ponderings,” for two local newspapers.
In his spare time, Steve enjoys reading, gardening, and landscaping around his house. He stays connected with his small group, Band of Brothers, as they travel toward Christlike character and Home together.

Steve also loves sharing his spiritual journey and teaching from God’s Word at churches and conferences.