You are here: Home / Books To Read / Family Reborn 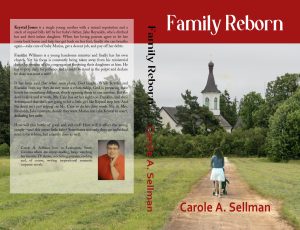 Krystal Jones had been raised to walk a specific path all her life. But in high school she rebelled and ran off with Jake Reynolds. Now as a young woman she was left with the consequences. She had ruined her reputation, was a single mother, and close to bankruptcy with bills, half not her own. Her loving parents had agreed to take let her come back home and help her get back on her feet. Finally, she could breathe again. That is all Krystal wanted to do; breathe, take care of Marisa, reconnect with her parents, reconnect with God and her church, get a decent job, and pay off her debts.
Franklin Williams was in his first ministerial position. He had served as assistant pastor in two previous churches, finally he had his own church. Yet his focus was constantly being taken away from his congregation by women of the congregation throwing their daughters at him. He had to pray daily for patience. He was ready to stand in the pulpit and declare that he did not want a wife!
It has been said that when man plans God laughs. While Krystal and Franklin were saying they did not want a relationship, God was preparing their hearts for something different. Slowing he opened their hearts to one another.
But the devil is alive and at work. Ms. Cain had set her sights on Pastor Williams and she was determined to have him and was not going to let a little girl like Krystal stop her. She knew how to put a word in here and there in the congregation. And if that did not work, a letter to the Board would take care of things.
But the devil was not relying on Ms. Cain to do his dirty work. He sent a couple he thought were his minions to do the job, Mr. & Mrs. Reynolds, Jake’s parents. They decide they want the baby, Marisa, and to have her they take Krystal to court, declaring her unfit.
How will this battle of good and evil end? How will it effect our young couple? And how will it effect this sweet little baby?
Sometimes not only does an individual need to be reborn, but a family does as well.

Author Bio:
I categorize myself as a Christian Fiction writer. Most of my novels can be categorized as Christian Romance, with sometimes a little humor thrown in for fun. though a couple of my novelettes are more contemporary. My short stories are a variety: some Christian fiction, some fictionalized from life memories, some from dreams. I can find stories in so many things if I sit and let my mind wander.

I began my writing career at the age of five. My mother always read to me and she taught me to read as soon as I was able. I remember one summer day she was busy sewing, I complained I was bored because I had read all my books many times over, and it was raining outside. My mother told me to write my own story. A whole new world emerged. I began to write stories and poems.

Writing remained my passion but I was discouraged in high school and college from making it a career. I was told that unless I wanted to teach English or literature that writing was not a career to pursue, so I took Business Management. I married, raised my son, and kept taking writing classes when time and finances would allow. I would send my poetry to contests and was blessed to have some of my poems published in anthologies.

I had two wonderful working careers. I worked for a law firm for thirty years. I began as a word processor, then advanced to a legal secretary and finally a paralegal. The firm was like my second family. I hated to leave it, but it was time to change from the larger suburban life to a more country setting. When we moved to the Eastern Shore of Maryland I worked to county government as an administrative assistant and enjoyed that career until it was time to stop working and devote my time to my family and me. Shortly after that we also decided to live Maryland for warmer climates and moved to South Carolina.

Now I am able to make writing my career. God has given me a gift and whether it was for me to share with some or many is yet to be determined.