You are here: Home / Books To Read / Faery Tales of the Future 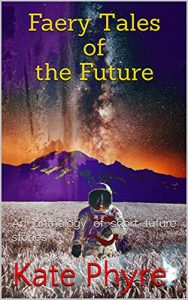 About Faery Tales of the Future:

In ArcLight -The fate of an Empire hangs in the balance as Whisky Jack argues with a hallucination or perhaps it’s something far more dangerous.

In The Shogun’s Blade – An ancient AI inhabiting the mind of a teenager experiments with seduction and power.

In Light in the Water – a bitter detective pries into the suspicious death of a top pilot. What he discovers will change everything. If he survives…!

In The Sunday People – clandestine aliens fight to survive a crash landing on Earth. Will they survive with the help of two adventurous teens on the verge of first love or will their mission upend civilization in unexpected ways?

In GodTouched – on a safari like no other three intrepid explorers discover much more than they bargained for!
Will they escape unscathed or pay the ultimate price?

Be ready to stay up late. You won’t be able to read just one!
Enjoy this epic fantasy adventure.

Kate Phyre is a writer, actor and pet-mom of very demanding kitties, living with a very patient partner. When she’s not writing she is creating mixed medium sculpture from reclaimed industrial materials, gazing at the PNW stars and is fascinated by all things mysterious. She is working on her next book or probably procrastinating on her next book.

Kate studied dance and theatre at the oldest theater conservatory in the U.S. The American Academy of Dramatic Arts in NYC. During her course work she indulged her passion for reading & performing the classics, Shakespeare, the American playwrights, the Greeks, as well as modern experimental theatre. As a performer she had the thrill of bringing some of literature’s classic characters to life. As a writer she gets the distinct pleasure of seeing her characters come to life for the reader.
She enjoys performing on-stage, film, TV & VO as much as she enjoys diving into the new worlds of her original stories.