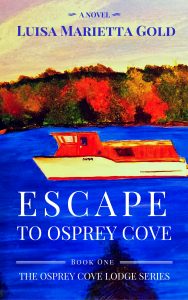 The mystery begins with an unusual find in the secret compartment of Doug’s new Corvette. It will forever change his and Catherine’s life. Doug’s mysterious behavior after the find forces Catherine to seek escape at The Osprey Cove Lodge. What she finds at the lodge turns out to be far more valuable than Doug’s find. Follow the suspense, mystery, and romance of Book 1 of The Osprey Cove Lodge Series.
Authors Note: The Osprey Cove Lodge series is uniquely written, spanning seven geographic locations from the scenic Canadian region of the Rideau lakes to the beautiful shores of the Caribbean. An interesting web of mystery develops as the characters’ lives intertwine. The setting for The Osprey Cove Lodge was born from my love of the beauty of this region in Canada. The description of the lodge is so beautiful and inviting that you will want to pack your bags and head there.

Author Bio:
Luisa Marietta Gold was born in Pennsylvania where she spent a large part of her adult life. She moved to North Carolina after the birth of her only daughter. She published her debut novel, Escape to Osprey Cove, which is Book 1 of The Osprey Cove Lodge series in September 2016. The Osprey Cove Series was born from Luisa’s love of the Rideau Lake region of Canada, the outdoors, and lake life. She spent many years enjoying the Rideau region while staying in lodges reminiscent of the lodge in her first novel. She currently resides on eleven acres in her North Carolina home near an idyllic lake with her husband and several mixed labs. She spends as much time as possible enjoying the beauty of the lake. Luisa also does acrylic painting. The cover of her debut book which features The Lady Droxell on a Canadian lake was painted by her. It was very satisfying to Luisa to know that she created the entire project. There is a tea room not far from her home where one selects a hat to wear while dining as did Libby and Rosalind in the book. And sometimes they are silly. Luisa’s bio picture was taken there.