You are here: Home / Books To Read / Dragon’s Mark (Chronicles of Alcabaza Book 1) 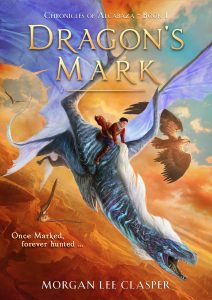 Rejected by the dragons and left disfigured by their magical fire, Isiah is faced with the horrifying prospect of being hunted until the day he dies.

But when he ventures into the unforgiving Badlands in the hopes of recovering a long-lost cure, he soon finds his fate tangled up with a hostile gang of Raiders and the mighty eagles they fly. The Raiders hold the key to fixing his curse—but if they find out who he is, they’ll kill him.

Fighting to keep his past a secret while navigating a deadly world of cut-throat thieves, buried ruins and vicious rivalries, Isiah must stay one step ahead of his enemies—all while figuring out who he can really trust. One wrong move and he’s as good as dead… and beneath the scorching Badlands sun, the dragons are the least of his problems.

Packed with an exhilarating mix of high-stakes action and death-defying adventure, Dragon’s Mark a page-turning thrill ride that’s perfect for fans of suspenseful fantasy with a breathtaking desert backdrop.

Author Bio:
Morgan Lee Clasper is a fantasy author and freelance copywriter who has a love for dragons, magic, and death-defying adventures. Despite being a self-described hermit, he’s moved 16 times across three different countries, and he’s lived in everything from English suburbs to a farm in New Zealand. As a copywriter with extensive experience in the publishing industry, he’s worked with best-selling authors and publishing brands to create beautiful book blurbs and marketing material. He’s also dabbled in photography, video game design, and blogging. When not writing, Morgan enjoys studying Stoicism and practicing the Wim Hof Method.