You are here: Home / Books To Read / Do No Harm 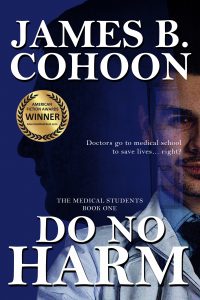 About Do No Harm:

Matthew was just a kid when his father was shot and killed when he surprised a home burglar. The culprit, Ted Nash, was sentenced to life in San Quentin prison. But that’s not enough for Matthew, who obsesses over his father’s murder. He attends Stanford Medical School to become a prison doctor. There is no such thing as a vigilante doctor…right?

Author Bio:
James Cohoon was the president of a Los Angeles based law firm until his early retirement in 2014. As a civil litigation lawyer for over 30 years, he frequently lectured and published legal articles. His daily work included writing legal briefs for judges and other lawyers which were, in essence, ‘stories’ to fit the facts of his hundreds of legal cases. He resides in California with his high-school sweetheart, Rozanne, with whom he has two children–Kristin, a lawyer who is presently a stay-at-home mother, and Travis, a doctor who is just starting a cardiology fellowship.

Besides playing with his grandsons–Everett and Beckett–James enjoys sighting Orca whales from the San Juan Islands shoreline, playing bridge, and mowing the lawn.

Do No Harm (The Medical Students, Book 1) is his debut novel. Book 2 in the series is in the works.