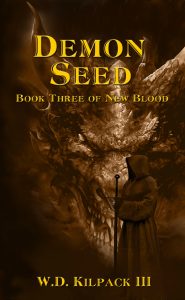 Despite growing power of the forces of chaos, there is a glimmer of hope as Natharr realizes that there are also forces of order in play. It is made plain when he and his comrades escape the faceless realm and Natharr’s Sight is released. It reveals just how strongly the world needs the Guardian of Maarihk and the return of the legendary Knights of Ril to the land where Mankind was created. Racing for home unwittingly leads to unearthing an ancient force created by the Olde Gods, believed lost aeons past.

Meanwhile, Darshelle and the crown prince struggle to make the most of their lives without Natharr’s protection. Forced to make their own way, the fruit of Quiet One’s efforts comes fully to bear, as Nathan and his summoned companion reawaken the animus of the ancient wood. The ramifications are horrible and far-reaching, changing their world forever.

Author Bio:
W.D. Kilpack III is an award-winning and critically acclaimed internationally published writer, with works appearing in print, online, radio and television, starting with his first publication credit at the age of nine, when he wrote an award-winning poem. As an adult, his first book, Crown Prince, received the Firebird Book Award. He also received special recognition from L. Ron Hubbard’s Writers of the Future Contest for his novella, Pale Face. He has been editor and/or publisher of 19 news and literary publications, both online and in print, with circulations as high as 770,000. He is an accomplished cook and has two claims he thinks few can match: cooking nearly every type of food on a grill; and nearly being knocked flat when his grill exploded.

He received both his bachelor’s and master’s degrees from Westminster College of Salt Lake City. As an undergrad, he double-majored in communication and philosophy, while completing the Honors Program. As a graduate student, he earned a master of professional communication with a writing emphasis. He was also a high-performing athlete, qualifying for international competition in Greco-Roman wrestling.

He is a communication professor and a nationally recognized wrestling coach. He is happily married to his high-school sweetheart and is father to five children, as well as helping to raise five step-children. He was born in Salt Lake City, Utah, where he continues to live, coach and teach.