You are here: Home / Books To Read / Deception – A Hollywood Mystery by Britt Lind 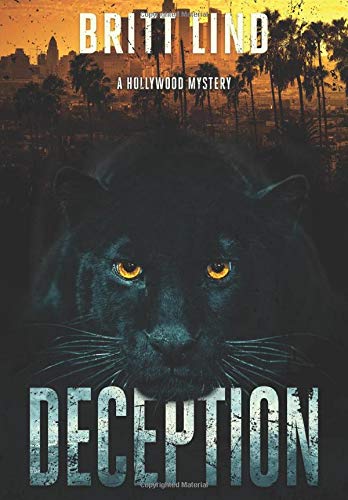 Josh Sibley, singer/songwriter, is handsome, talented, smart and headed for oblivion. Alcohol provides relief when his demons threaten to overwhelm his every effort to break free of his past. To pay his bills, he works as caretaker at the zoo, which is a perfect job for Josh who loves animals more than any person he has ever met. When his friend Jennie Seger arranges for him to write songs for a multi-million-dollar feature, all his doubts and fears fall away and he embraces the opportunity like a starving man who has found a bounteous feast in the midst of famine.
Lightning strikes his lonely heart in the form of singer/actress Lila Levy who is married to the producer of the movie and flaunts her sexuality at Josh knowing her breathtaking beauty more than makes up for her lack of talent. Knowing his love for Lila is doomed from the start, he overlooks her shortcomings and keeps his feelings under wraps as he teaches her to sing his songs. What’s more important, his career or a night with Lila? At this point in life, it’s a no-brainer.
But this is Hollywood and nothing is as it seems. Lila has secrets that Josh cannot begin to fathom and doesn’t want to know. When her husband Stan is murdered, Lila disappears and Josh is confronted by the woman determined to track her down, Sergeant Rosemaria Baker of the Beverly Hills Police Department. Rosemaria is the polar opposite of Lila; hates show business, and considers Josh a delusional loser. When the cops track down Lila and bring her in, Lila declares herself innocent and the fight for the soul of Josh Sibley begins.
While Rosemaria comes to understand and care for Josh, Lila manipulates and keeps him entangled in her life and evil machinations. Rosemaria breaks though his defenses when she helps save the life of Josh’s best friend Noor, a black panther who lives at the zoo. But her relentless investigation of Lila is an impenetrable barrier between her and Josh.
Hating herself for falling for the kind of man she would never in her life have considered before, Rosemaria becomes inexorably involved in solving the riddle of his tragic past. But Josh, bewitched by Lila, is unreachable.
When the truth about Lila finally comes out in court and Josh can finally see his way out of his lovelorn haze, Rosemaria has gone. Before Josh has any chance to find her and make things right, he has to come to terms with remembrances of the pain he has been avoiding and accept the gifts life is more than ready to offer him.

Britt Lind is an actress, singer and writer who has performed in television shows, movies and on stage in Los Angeles, New York and Vancouver, B.C. She has written several screenplays and wrote and directed a short film titled Obsession. She came in as runner-up in the Washington State Screenwriting Competition for her screenplay A Light in the Forest and won the Beverly Hills Book Awards for her memoir Learning How to Fly. She also won A Best Book Award from Chanticleer and a five-star medal from Reader’s Favorite for her third book Malevolence – A Hollywood Mystery. A Fate Worse Than Death is a Prequel to her second book, Deception – A Hollywood Mystery. All are available on Amazon. Britt lives in Thousand Oaks, California with her husband, Nick Alexander, a screenwriter, and their two feral cats, Toughie and Baby Hughie who used to live a hardscrabble life in the cold and rain in the frozen north and now enjoy a life of luxury in the sun as is their due. Britt is also president of a nonprofit, People for Reason in Science and Medicine, a pro-health, pro-environment, anti-vivisection organization.