You are here: Home / Books To Read / Death’s Fair Maiden 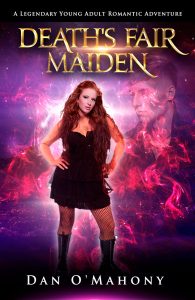 There is something about Eve that can only be described as “enchanting” or “magical.” She is a young hospice worker assigned to work with seventeen-year-old Tommy Kennedy’s beloved great-grandmother. Eve charms Tommy and his family. She always has the right thing to say, and her mere presence comforts them in their time of need.

Only Tommy has seen Eve before — in a nightmare he’d had that took place in ancient Ireland, where Eve was brutally murdered.

Tommy and Eve grow close even though he remains haunted by her presence in his dream. Eve reveals her secret. She is the girl in his dream. She died and was reborn as a banshee, a guardian spirit that helps her descendants, which include Tommy and his family, during times of need.

Eve becomes a fixture in Tommy’s life, and what starts as a friendship promises to turn into more. Unfortunately, Eve has a powerful enemy who could threaten their happiness. Tommy and Eve risk a lot by staying together, but they believe their love is worth fighting for.

Pick up a copy of Death’s Fair Maiden and experience this mythic romance.

The man known as Dan O’Mahony was born in a library and raised by a pack of wild fantasy novels who brought him up as if he was one of their own.