You are here: Home / Books To Read / Death on the Line by Carol Amorosi 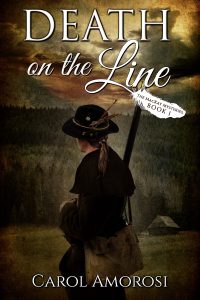 About Death on the Line by Carol Amorosi:

Angus MacKay is a young Scotsman seeking a new life in the American colonies. Eager to please, though lacking self-confidence, he is hired to assist Mason & Dixon on their ground-breaking survey of the American territories of Maryland and Pennsylvania. Tempers still run high after eighty years of skirmishes along that border, including one man’s ongoing battle with the law.

Angus befriends Liam, an Irishman trying to support his small family in the new world. Intrigued by the natives who inhabit this strange wilderness Angus learns more about their culture. But who is that mysterious one-armed man he sees wherever he goes?

Angus’s dreams are shattered when he trips over a dead body, and the local sheriff would like nothing more than to arrest him for the murder! Will his logical mind learn the truth? Will he find acceptance for himself?

A murder mystery set in 18th-century America. Interesting characters abound, each with an agenda, including a rifle-toting minister convinced the natives are responsible.

Author Bio:
Amateur Historian-Traveler-Celtic Enthusiast
“It will be an adventure” seems to be the theme of Carol’s life. Despite her family’s love of roller coasters, their exploits rarely involve life-threatening activities. These adventures do include her love of travel, history, and the outdoors. Her daughter and son refer to her excursions affectionately (she hopes) as ABC tours… Another Bloody Castle/Cathedral.
Over the years, she has put her passion for history to good use as an interpreter spanning different periods from the Romans to the Middle Ages to the Revolutionary War. Today, Carol and her husband, Dave, call Germany home, and she spends her time practicing German on their two cats and Widgit, the History Hound. With their children grown, Widgit joins them now on their escapades.
Carol enjoys gardening when she is not writing, especially learning about plants from the past and their culinary and medicinal uses. While living overseas, she keeps in touch with her grandson, Huxley, through Nana’s Dinosaur-of-the-Month Club.