You are here: Home / Books To Read / Death of a Yellow Page Salesman: From Lost to Found — Filled to Overflowing by Paul T. Neustrom 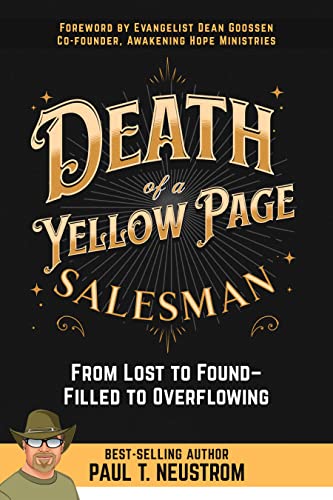 Death of a Yellow Page Salesman: From Lost to Found — Filled to Overflowing by Paul T. Neustrom

Having advised and consulted over 10,000 business owners never prepared me for hitting the lowest point in my career. For over 40 years working mostly in marketing and advertising in yellow page directories, I found Google had effectively destroyed my career. Recovering from that was not an instant process but I describe the struggles and triumphs of that journey in this book. My mission now is to help entrepreneurs and business owners to dominate in marketing through: KillingItOnline.com

Among the vast array of self-help books that promote their own methods of being successful, very few speak of an understanding of effective communication and why these principles work. It is transformational when we understand the way we communicate with others, which is oftentimes governed by how we talk to ourselves. Marketing is my specialty, and I am writing this book to show how the power of words will change your life.

Through this book, you will learn how to grow and transform your business and life by gaining inspiration from the small, still voice of God. Going from lost to found is something; not only business owners do, but that we can do for our own lives. Filled to overflowing is a whole other story.

See my #1 Bestselling Book on Amazon called “Coaching Inc” with lead author Ray Brehm. My chapter was his favorite and is called “TOPGUN Coaching.”

Get This Business Book.

T Paul is known for leading a group of sales teams to record levels. Not only were the teams ranked #1 nationally but they also broke sales records doing it. Neustrom was also a top rated performer himself when he worked for the sister company to AutoTrader and became the #1 rep in the nation for AutoMart.com. They did so well in fact that Auto Trader bought them out, because they were “Killing it with Google”.

Looking back Neustrom’s drive and determination came from his competitive career in gymnastics. Not only was he a five time state champion in high school, but also a vital team member on the #1 ranked collegiate team in the nation at the University of Nebraska. Coach Francis Allen said to him after his freshman year, “Neustrom, you are the most consistent man in the nation.” The principles he learned there, as well as leading numerous sales teams plus owning multiple businesses is what he teaches to others.