You are here: Home / Books To Read / Daughter of the Ageian – The Dragon Wars Saga Volume One by Marius H. Visser 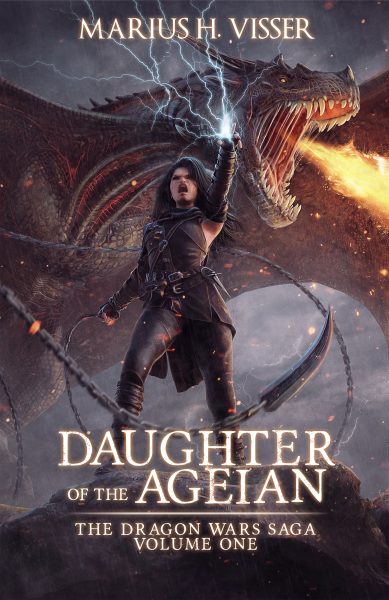 Daughter of the Ageian – The Dragon Wars Saga Volume One by Marius H. Visser

A choice to be made, one that holds not only her future in its grasp but also the fate of the world. Can she truly do what needs to be done? Or will fate prove stronger than the strength she can muster?

In a world where dragons are naught but legend: imprisoned in magical spheres known as Balamuths and locked away for generations, only to be released when a bonding is called for by the most elite of soldiers, an unwitting thief does the unthinkable in a desperate attempt to overthrow an underground guild of assassins and thieves. He bonds with a dragon…but the costs are high.

Beuneth, a powerful sorceress, seeks to align herself with a warlock that knows the location of a Balamuth she needs to fix a terrible wrong and an epic journey takes them on a path where doing the right thing, might end up causing terrible harm to the world. The lines of morality gets blurred and lives hang in the balance before long. And all she wants to do is save her love.

Daughter of the Ageian is the rousing introduction to The Dragon Wars Saga, an epic fantasy adventure that will keep you coming back for more.

A professionally trained Information Technology Specialist Marius H. Visser spent the better part of a decade honing his writing skills and pushing the bounds of imagination after his debut fantasy novel Mercury Dagger – A Tale From Kraydenia. When Marius H. Visser is not off exploring the wilds of Australia, he is dreaming up new adventures and monsters to cause chaos in a fantastical world filled with twists, loyalty, honour and great and terrible battles.