You are here: Home / Books To Read / Daughter of Song 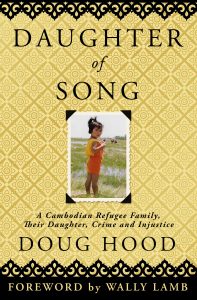 About Daughter of Song:

Volunteering in a women’s prison, Doug discovers Panna Krom’s story, a devastating tragedy that sends him on an arduous quest to right a terrible wrong. Following an almost impossible path, Doug embarks on a journey filled with emotion, determination, and dread to make the unjust suffering of one person, matter to many others.

Doug Hood was born in Detroit, attended grade and high schools in Asia, and studied at the University of Florida with a degree in Physics (Sigma Pi Sigma honors) and Yale University in the Physician Associate Program, where he was a Fellow at Pierson College.

Doug has been a Lecturer in Neurology at Yale University and a regular lecturer at the University of Southern California. He is currently an Assistant Clinical Professor at Quinnipiac University.

He has published numerous short stories and has essays in four anthologies. This is his first book.

He and Panna were keynote speakers at the University of Connecticut Law school and their program on NPR won the 2017 PRNDI award for best interview. He has been retained as a (pro bono) clemency expert for about a dozen incarcerated women in Connecticut.

Doug lives in North Haven, Connecticut with his wife and two children.