You are here: Home / Books To Read / Daughter of Liberty by J. M. Hochstetler 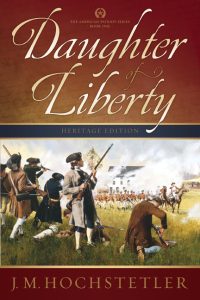 About Daughter of Liberty by J. M. Hochstetler:

Eastertide, April 1775. In the blockaded port of Boston, Elizabeth Howard plays a dangerous game. As the infamous courier Oriole, she is hunted by the British for smuggling intelligence and munitions to the Sons of Liberty by night, while by day she flirts with British officers to gain access to information the rebels so desperately need. But she hasn’t counted on the arrival of Jonathan Carleton, an officer in the Seventeenth Light Dragoons. To her dismay, the attraction between them is immediate, powerful—and fought on both sides in a war of wits and words. When Carleton wins the assignment to ferret out Oriole, Elizabeth can no longer deny that he is not only her most dangerous foe, but also the possessor of her heart.

As the first blood is spilled at Lexington and Concord, Carleton fights his own private battle of faith. And headstrong Elizabeth learns the bitter consequences of following her impulsive heart when her dangerous role thrusts her into the carnage of Bunker Hill.

J. M. Hochstetler is the daughter of Mennonite farmers and a lifelong student of history. A professional editor and publisher, she writes deeply researched and historically accurate historical romance fiction. She coauthored the award-winning Northkill Amish Series with well-known author Bob Hostetler which is closely based on the inspiring true story of their German Amish ancestors who emigrated to Pennsylvania in 1738 and were caught up in the brutal attacks of the French and Indian War. Her American Patriot Series is the only comprehensive historical fiction series on the American Revolution. Her novel One Holy Night, set during the Vietnam era, was named the Christian Small Publishers 2009 Book of the Year.

Hochstetler is a member of Daughters of the American Revolution and American Christian Fiction Writers. She is an avid gardener and loves scrapbooking, counted cross stitch, and a variety of other crafts. She and her husband each have three daughters and numerous grandchildren with whom they love spending time.