You are here: Home / Books To Read / Cyber Thought Police: A Cyborg’s Call to Liberate Humanity 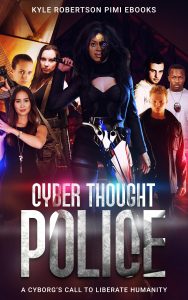 About Cyber Thought Police: A Cyborg’s Call to Liberate Humanity:

It all began with personal voice-activated assistants in the 21st century. It took millennia to evolve, but Humanity finally accomplished their quest for convenience by creating Circumscriber, The first true artificial intelligence for humans in computers.

Author Bio:
Kyle Robertson grew up an only child. His immediate family moved from Baton Rouge Louisiana to Milwaukee when he was 3. Without siblings, he realized very early in life he needed his imagination in order to make it through this life.