You are here: Home / Books To Read / Crimson Reign 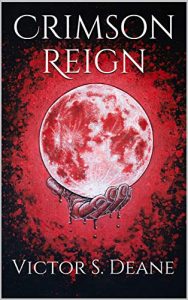 In a world hanging in the balance between light and dark, two societies on the brink of conflict struggle to contain a growing evil. Callowmane, home to a community of affluent humans. Right beside her sits Minnar, a mining town populated by the blood class; a sect of civilization looked down upon by the other social hierarchies.

When a missing persons case leads Dr. Cro Myrus into the fray, he finds himself embroiled in a dark mystery leaving a trail of bodies in its wake. Someone is hunting the blood class in the name of their god. As an outsider, Cro quickly learns that Callowmane is not the utopia it’s been made to seem. Surrounded by forces he doesn’t understand, he finds solace in Lady Amora of the infamous Velmir Manor.

During his search for answers he learns more about the grisly histories of Callowmane and Minnar, ultimately questioning Amora’s own dark past and her true end game. With each person of interest hiding their own agendas and secrets, it will take every bit of intellect and strength for Cro to unearth the darkness spreading throughout the land as the Crimson Moon draws near.

Stakes rise as does the body count, forcing Cro to fight for his life. But when his faith is tested and truths are laid bare, will he fall victim to the growing shadow? His mind won’t be enough to stop the reckoning that awaits… one that threatens not just the region, but the entire world as he knows it.

Author Bio:
Victor is the author of Godstruck and Crimson Reign, both available on Kindle. After earning his bachelor’s degree in Corporate Finance from the University of Pittsburgh, he now lives in the suburbs of Philadelphia with his fiancée Valerie and their double-doodle Nova enjoying the Eagles and cheesesteaks. When he isn’t writing, Victor enjoys watching his favorite shows (including Carnival Row, Castlevania, Penny Dreadful, Game of Thrones, etc.), reading, exploring the DC Universe, playing chess, engaging in physical fitness and working on his next novel.