You are here: Home / Books To Read / Criminal Tendencies: The Salvatore Luzani Story by Steve Stanley 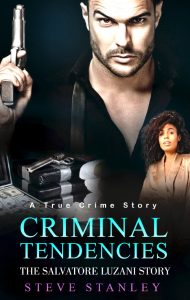 About Criminal Tendencies: The Salvatore Luzani Story by Steve Stanley:

Criminal Tendencies is the true story of Salvatore Luzani, who went from an almost normal high-school student in the suburbs to forming his own paramilitary “crew” and climbing the ladder to become a Top Tier Drug Dealer. He was not shy about taking on any enemy, including the Mob.
He built such a reputation that people knew if they crossed Sal, they would most likely be swimming with the fishes. Readers will be reluctant to put this book down. It is filled with suspense, action, and Sal details everything as it goes down.
Sal always knew he had Criminal Tendencies, but he was losing control of them. People have died, and Sal was tried for 2-counts of First Degree Murder and Acquitted.
You would think that his experience would be enough to straighten him out, but he constantly found himself doing things that were illegal, and he found them exciting and a challenge.
So, get comfortable and enjoy a true crime story about the notorious Salvatore Luzani.

Steve Stanley is a serial entrepreneur with 35+ years of business experience. He has authored over 1700 marketing articles and his work has been published in many Top Tier Media publications. Criminal Tendencies is his debut Non-Fiction Novel. It has become the first book in the Criminal Tendencies Series. Steve has a refreshing writing style that makes the reader feel they are part of the story.