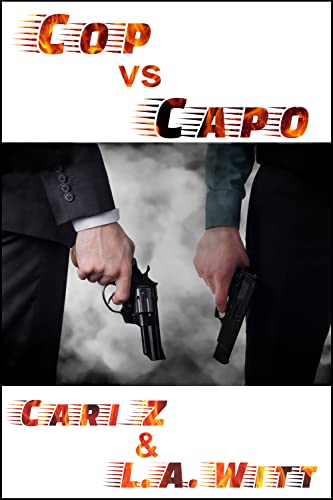 Wherever August Morrison and Ricardo Torralba go, chaos is sure to follow. The authors certainly know this, since their “standalone book” has now turned into a series with no end in sight, because…UGH. These two. We give up.

Detective David Chandler had no clue what he was getting into when he and his partner decided they were going to nail August for murder. They didn’t realize it was one of the few murders August didn’t commit, or that their homicide investigation would lead them into the middle of a mob war.

Cavalcante underboss Pedro Silva knew asking August and Ricardo for help was a terrible idea. Just mentioning their names is bad for Pedro’s blood pressure. Owing them a favor? Oh Lord. He still asked, though, because he was out of options, but he can’t say he didn’t know he’d regret it.

Neither man expected things to blow up this badly.

Now they’re both on the run from the mafia, the cops, and everyone in between… except for August and Ricardo. On one hand, that means they have two expert assassins in their corner. On the other, it means they have the biggest troll on the planet heckling them at every turn. And sticking them in a safehouse together. With only one bed.

Get This LGBT Book.

L.A. Witt is a romance and suspense author who has at last given up the exciting nomadic lifestyle of the military spouse (read: her husband finally retired). She now resides in Pittsburgh, where the potholes are determined to eat her car and her cats are endlessly taunted by a disrespectful squirrel named Moose. In her spare time, she can be found painting in her art room or destroying her voice at a Pittsburgh Penguins game.

Cari Z was a bookworm as a child and remains one to this day. She writes in a wide range of genres , but somehow 90% of what she produces ends up falling into the broad and exciting category of m/m romance. There’s a sprinkling of f/m and f/f and even m/f/m in her repertoire, but her true love is man love. And there’s a lot of love to go around.