You are here: Home / Books To Read / Collateral Intentions 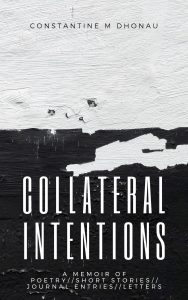 At what point does practicing vulnerability fortify ourselves such that we become…invulnerable? This is the vessel on which Constantine Dhonau invites us to explore our most sacred treasure: our inner world. Our voyage is furnished by his journey back across 11 years, from a 17-year-old boy faced with becoming a 28-year-old man, offering a glimpse into his inner dialogue of self-criticism and self-affirmation. We follow his development as a writer and a person as he walks the line between light and dark, love and lust, choice and powerlessness, seeking to free himself from the dichotomous pitfalls of black and white thinking. Throughout this 11-year exploration, he reflects on who he has been, who he is, and whom he wants to become on his way to uncovering a higher calling. He encourages us to embrace the unknown as he bares naked the “collateral intentions” of his choices; those heartfelt efforts which turned against us and those mistakes which became our greatest blessings, in time.

Author Bio:
Constantine was born in St. Petersburg, Florida and raised by his mother and his aunt, with the help of several formative programs: Cub Scouts, Boy Scouts, Venture Crew, and Sea Scouts. He spent 3 years as the front man for a Tampa ska/punk band: H1N1. After overcoming blind rebellion against “the system,” he attended St. Petersburg College for his Associate of Arts, followed by New College of Florida for his Bachelor of Arts in Psychology.

He made his initial escape to Colorado in 2015— degrees in-hand—in search of his independence, dedicating a year of service to City Year Denver of AmeriCorps. There, he discovered a new passion and direction in life: wilderness therapy. He pursued his first and only dream and vision in life with ferocity to become a field guide with Open Sky Wilderness Therapy, completing nearly 550 days in the field.