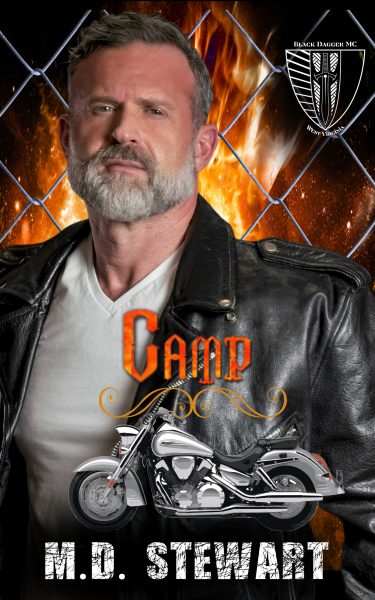 Sometimes, if a man thinks he’s going to lose something, he’ll realize how badly he wants it.
Campbell “Camp” Barlowe was a street kid raised by one founder of the Black Daggers. He’s now the forty-two-year-old silver fox president of that MC and a firefighter for the city of Charleston. When he’s called to a house fire, he rescues a woman held prisoner in the basement. With nowhere safe to go, Camp hides Rachel in his home. He finds himself fighting his attraction to the girl who fits in his life like a glove but is fifteen years his junior.
Rachel Torrance is no innocent kid. She’s quickly approaching thirty and has seen her share of violence. Her older brother is an Enforcer for the Soulless Bastards MC. He also kidnapped and sold her to pay off his debts. As the only girl and middle child, she grew up tough and learned to fight to protect her younger brother, but no one taught her how to fight for a man who thinks he’s too old for her.
Camp is the fourth book in the Black Dagger MC series and contains a couple fighting an evil human trafficking ring, and an age gap romance between a stubborn man and a strong woman who makes no bones about her desire to be his Old Lady.
All the characters in this series appear in each book. Due to the timeline of the series, some events in Camp began in Buc, Black Daggers MC 3. You’ll get a broader understanding of the complex characters and events of the MC if you read the series in order.

I grew up in southern West Virginia and have recently included my home state in my MC romance series. I hope my books can transport you to faraway worlds where there’s always a happily ever after!