You are here: Home / Books To Read / Burnout 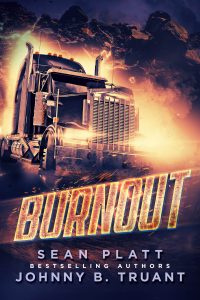 Cutter Dunn was born a ghost.

Unchipped and unregistered, he exists as a nonperson, living off-the-grid, unrecognized by the facial recognition software built into every smart glass device that provides everyone with everything they want and need. According to the official system, he doesn’t even exist.

He has the skills and out-of-the-box perspective to design the nuts-and-bolts mechanism for the next generation of driverless shipping vehicles. He’s also the kind of person that a massively wealthy and corrupt corporation can exploit and make disappear without a trace. For good measure, they also erased his home settlement of Amenity, bulldozing the dwellings, scattering the residents. And that was their big mistake.

Burnout is a new stand-alone science fiction thriller by masters of storytelling, Sean Platt and Johnny B. Truant. If you like movies like Falling Down and Snatch, then you’ll love Burnout.

Sean Platt is an entrepreneur and founder of Sterling & Stone, where he makes stories with his partners, Johnny B. Truant, and David W. Wright, and a family of storytellers.

Sean is a highly-prolific author in both fiction and nonfiction, with more than 10 million words under his belt and more than a dozen published collaborations. He brings a rich sense of place, strong pacing, conflict-filled dialogue, powerful twists, and a flair for high-stakes drama to every story he contributes to. He’s known for bringing out the best in whoever he collaborates with, thanks to his generosity, his adaptability, and his philosophy that “the best idea wins.”

You’ll see Sean’s work as a co-author with Truant and Wright, and invisibly all throughout the studio.

Originally from Long Beach, California, Sean now lives in Austin, Texas with his wife and two children. He has more than his share of nose.