You are here: Home / Books To Read / Bully Shack 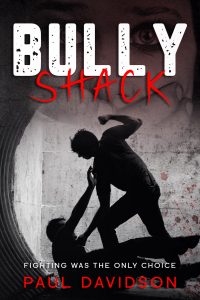 The Kid learned the hard way that you can try to be a pacifist in a world full of clenched fists, stiff upper lips and mean looks, but it won’t get you far—and it might get you killed.

Olebark—The Kid—grew up in a community infested by fighting, bullying, organized fight clubs, gambling, and hoodlums. A world of few laws and fewer smiles and the backdrop to the incident that changed him forever. Traumatized and beaten at the age of six, The Kid decides to take things into his own hands—in fact, his own fists.

A fictionalized account of a true event, Bully Shack takes you on the intrepid journey of a boy that was initiated into his childhood through a brutal beating at the age of six. Traumatized and terrified, he vowed to fight his way out of his rotten world.

While The Kid fights his own battles, the institutionalized bullying and unwilling-sex-in-return-for-protection go on around him, ensnaring almost everyone he knows in its horrid web. Girls “put out” so that they are exempt from being mistreated, beaten and raped. Other boys are dragooned into a nightmarish Fight Club world—where nobody talks about it because they are too intimidated to do so.

To tell is to risk all.

In this true tale, one boy’s courageous battle against intimidation and emotional, spiritual and physical torture inspires those around him to rise up and fight—to fight for their lives.

Author Bio:
The author is an avid reader of history and enjoys baseball.