You are here: Home / Books To Read / Blue Sunrise 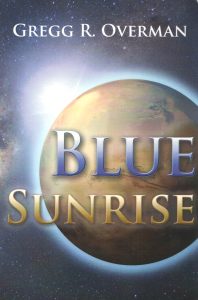 Thousands of years in the past, a race of aliens reached out to save the aliens of another planet from certain extinction and were rewarded by enslavement and the theft of their technology. That technology was harnessed to ensure that no other sentient species might rise up to challenge the now dominant race. They have been 100% successful. They have found Earth.
On the Moon, a man who loves his children just slightly more than he loves his drug of choice is put to a test that will determine the future of mankind.
On Mars, the first manned mission struggles for survival and becomes the target of destruction aimed at Earth.

Born in New Orleans a long time ago in a galaxy far, far away, Gregg grew up in central Louisiana under the oppressive tutelage of the priests and nuns in the catholic school system. After graduating from LSU, he managed to gather together funds for enough counseling that he can now sit down with people dressed in black and white without suffering an anxiety attack (most of the time). He spent most of his working life slaving away as a chemist and sticking it to the man every chance he got. He finally broke away from corporate life and formed his own company. He still enjoys sticking it to the man, but since he is now the man, he’s basically sticking it to himself. Fortunately, he has not developed the warts that Father Wakeman told him would result from such activity.
He now lives in the woods in Hernando MS with his final wife and a menagerie of various animals including, but not limited to, three dogs, three cats, twelve chickens and numerous deer, possum, armadillos and racoons. He has found that the dogs will sometimes pay attention to him. He would like you to buy his book so he can get more dogs.