You are here: Home / Books To Read / Before I Wake Travels Across Time/Book One by Mary Ellen Johnson 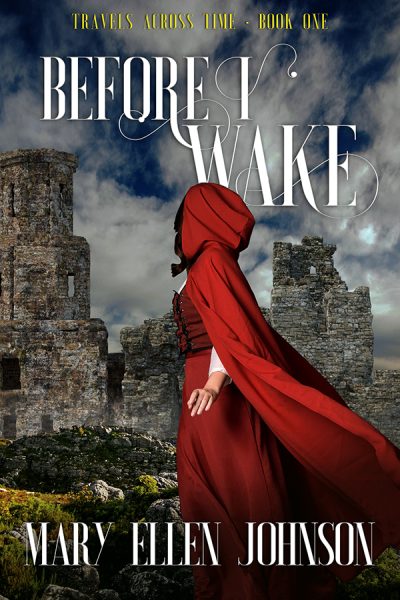 Historical novelist Magdalena Moore is haunted by the black-haired, black-eyed knight she first encountered during a past life regression. Across a lifetime, Magdalena searches for the truth about Ranulf Navarre and his wife, the meek, complaint Lady Jane.

At Tintagel Castle, Magdalena is miraculously transported to thirteenth-century England, where she is Lady Jane, and Lord Navarre is her husband. But Ranulf is not the man of her imagination.

Why is Ranulf so cold and Janey so erratic? What secrets are they hiding? When England plunges into civil war, Ranulf backs the wrong side. Knowing he is destined to die in battle, Magdalena tries desperately to cheat fate, save Ranulf, and finally find happiness. But when her secrets are laid bare—or more specifically Lady Jane’s secrets—Magdalena fears Ranulf can never forgive her. And if he cannot, will they be forced to replay their doomed love yet again?

Her passion for Medieval England sparked Mary Ellen Johnson’s writing career. Her first medieval historical, The Lion and the Leopard, was followed by The Landlord’s Black-Eyed Daughter, a historical novel based on the Alfred Noyes poem, “The Highwayman.” (Published under the pseudonym, Mary Ellen Dennis.) Landlord was chosen as one of the top 100 historical romances of 2013.

After taking a twenty-year detour in a quixotic quest to change the world—rather like Arthurian knights’ quests to find the holy grail, which ended in similar failure—Mary Ellen happily returned to historical fiction writing and her favorite time period, the tumultuous fourteenth century. Her six-book series, Knights of England, follows the fortunes of the characters (and their progeny) introduced in The Lion and the Leopard through the Black Death, the reign of that most gloriously medieval of monarchs, Edward III, the 1381 Peasants’ Revolt, and ends with the deposition and murder of Richard II in 1399.
Upon finishing Knights of England, Mary Ellen turned her attention to time travel. First in her Travels Across Time four-part series is Before I Wake. Mary Ellen particularly enjoys placing contemporary heroines in previous time periods so she can juxtapose the old with the new. Such as: medieval heroines expected arranged marriages while a contemporary placed in that time would be quite indignant—and soon find said indignation would not only be inappropriate but puzzling to her medieval characters. Love playing with the clash of cultures!

When not writing, Mary Ellen enjoys visiting her kids and grandkids and occasionally taking trips across the pond to view once again the castles, cathedrals and battlefields that so inspire her.