You are here: Home / Books To Read / America: Standing Strong 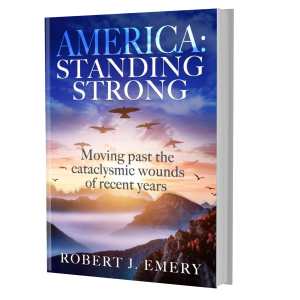 America: Standing Strong,” brings together investigative reporters, scholars, scientists, medical professionals, and an endless string of quotes from respected voices across the spectrum to examine the events of recent years, not what we already know, but what we may not, or have yet to acknowledge, in our quest for reformation.

“… This book calls for a return to “common sense, reason, and compromise.” Emery’s guide focuses on the major themes… Black Lives Matter protests, Covid-19, January 6 insurrection (and) examines broader questions about America’s future, from changing demographics and social media to “the loss of civility” and threats to democracy. With a career as a director and producer of feature-length films, documentaries, and television shows, as well as the postretirement publication of SF thrillers, Emery is a skilled storyteller with a gripping writing style that effectively distills the social, cultural, and political milieu of the last six years into less than 300 pages. A well-argued case for political and social healing in the U.S.
—Kirkus Reviews—