You are here: Home / Books To Read / Alexander’s Song 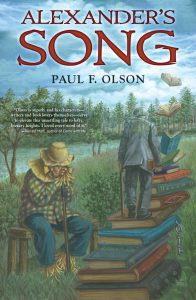 For a time in the 1940s, Alexander Bassett was one of the brightest stars in the literary firmament, an acclaimed novelist, poet, and playwright, a voice for social justice. But the years took their toll, Bassett’s work fell out of favor, and eventually, the man himself dropped out of sight. By the time the world learned of his death in 1969, few noticed or cared.

Years later, a school teacher named Andy Gillespie sets out to write about Bassett’s life and visits the author’s hometown, eager to learn about his early years. He arrives in Rock Creek, Michigan, expecting to find a small town proud of its famous son, but what greets him is something much different. Only a handful of old-timers even remember Bassett’s name, and most have no interest in Andy’s quest. Doors are slammed in his face. People turn away. Even the few who seem willing to talk – an enthusiastic high school student, an eccentric shopkeeper, a colorful hotel owner, an elderly hermit – raise more questions than they answer.

Despite the odds against him, Andy continues to dig. From dusty library shelves to the neglected stones in a lonely graveyard, from the pages of forgotten journals to the shores of a remote island, he gradually uncovers fragments of the truth, revealing glimpses into Alexander Bassett’s past that are unexpected, mysterious, and frightening.

Then the notes start to arrive.

Alexander’s Song is the story of an author nearly forgotten by time, a man whose life was nothing like it seemed, and a chain of darkness that began decades ago and is not finished yet.

Paul F. Olson debuted as a fiction writer in 1983, with his short story, “The Visitor.” His first novel, The Night Prophets, followed six years later. In the late 1980s, he published and edited Horrorstruck: The World of Dark Fantasy, a trade magazine for horror fans and professionals. With the late David B. Silva, he co-edited the anthologies Post Mortem: New Tales of Ghostly Horror and Dead End: City Limits, and created the award-winning newsletter Hellnotes, which he and Silva produced weekly for five years. Following Silva’s death, he teamed with Richard Chizmar and Brian James Freeman to put together the tribute anthology Better Weird. Some of his short fiction is available in the collection Whispered Echoes, which includes the World Fantasy Award-nominated novella “Bloodybones.” He lives in Brimley, Michigan, not far from the shores of Lake Superior.