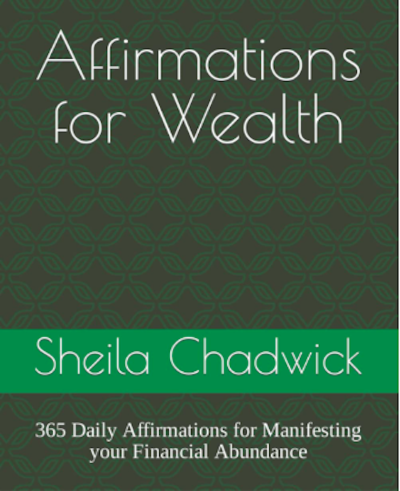 This manifesting workbook has been designed for you to use daily. Once you learn how to surround your thoughts with positivity, you can attract and manifest all the things that you desire. Each affirmation includes a section for you to write down your own thoughts, plans, goals, dreams, wishes and aspirations.

Get This Health & Fitness Book.

Sheila Chadwick, from the United States, is a writer, former music critic and entertainment news writer and host of “The Ghetto Cooking Show”, an International online cooking program that focuses on using foods available in most people’s cup boads. She holds an Associate Degree in Business Administration, a Bachelors Degree in Business Management and a Masters Degree in Educational Technology.

While her education has been in various fields, her love has always been in entertainment. In 2001, Sheila created the Word On The Street message board out of a desire to converse with other people online. She found that there was a market of other music and entertainment news lovers that shared her passion for celebrity gossip. Over time the board grew tremendously and was frequented by many news and radio personalities as they knew this was (at that time) one of the top sources for celebrity gossip.

Around 2004, Sheila began to summarize the news and forward onto her family and friends by way of a weekly email. The response was so great, that many of the people would not only forward it on to their friends but also request it more frequently. It was because of this venture that she came to contribute her journalistic talents to other sources such as Crystal Magazine, Mahogany Magazine and liner notes for the Midnight Soul compilation released on the Right Stuff Records label; a division of Capital Records.

Susan’s death prompted Sheila to evaluate her goals in life as she realized how important living out her dreams was so she decided to start her own magazine which she affectionately called Word On The Street. Word On The Street the magazine introduced in the fall of 2004.

In 2005, Sheila was profiled on Lifetime TV in their celebration of “Real Women, Real Lives” and in 2006, she was named Diva Soul Sista of the month by DivaSoulSista.com.

Over time, Sheila interviewed more than 30 singers, rappers and musicians and in 2007 after her final interview featuring Chaka Khan, she retired Word On The Street to finish her Graduate Degree and pursue other interests.

In 2008, Sheila wrote a book titled “Dramedy: Short Stories of Urban Chronicles Vol. I”. The following year, Sheila met Comedian Royale Watkins on Facebook. Royale started a video blogging phenomenon with Sheila being one of his earliest followers. While looking for unique ways of promoting her book; Dramedy: Short Stories of Urban Chronicles Vol. I, Royale suggested that Sheila participate in video blogging herself. Instead of following the trend of being a face-on commentator, Sheila decided to follow her passion of cooking and this was the start of The Ghetto Cooking Show which focuses on preparing meals using whatever you have in your house. The show was an overnight hit and is well received by viewers.

The Ghetto Cooking Show ran from 2008 to 2022 and in true Sheila form, she moved on to other ventures. In January 2022 she wrote and self-published the book “IF IT DON’T MAKE DOLLAR$, IT DON’T MAKE SENSE: How To Turn Your Hobbies Into Profits” and in November 2022 she wrote and self-published a workbook titled “Affirmations for Wealth: 365 Daily Affirmations for Manifesting your Financial Abundance”

Sheila is a native of San Francisco, CA, married to a Successful Business Owner and living in the Bay Area.