You are here: Home / Books To Read / About a Relationship by Werner Langer 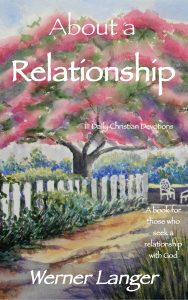 About About a Relationship by Werner Langer:

This book is filled with an adventure most of us would love to experience. His story is presented in one-hundred-and-eleven chronological short-stories, and this book reads like a novel. These are true events in the author’s life over the past thirty years, aimed at Christian readers. However, this book is also highly recommended for those who seek an engaging story and wish to escape from this world for a few hours.

Werner Langer lives in Australia. Born in post-war Germany in 1949, he was educated in that country to eventually become a police-officer. Aged twenty he left Germany to migrate to Australia, where a foreign language and considerable difficulties awaited him. Three years later he entered the College of Art, to study photography. This art-form became his professional life for forty-years. At the age of forty-two, during a photographic assignment on a lonely beach, an unusual event changed his life forever. It marks the beginning of this book, titled “About a Relationship.”

Werner is now retired, after having served for seven years as a chaplain in the local Magistrate court. In his spare time he loves gardening, watercolor-landscape painting and sailing. He has published an earlier book, titled “About a Gardener”, also available on Amazon.