You are here: Home / Books To Read / A Recipe for Magic by K. C. Lapointe 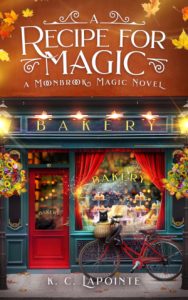 About A Recipe for Magic by K. C. Lapointe:

When they touch, it’s magic. The only problem is, he doesn’t believe in magic. What’s a witch to do?

Trixie Tompkins is a witch with a simple dream: to make Moonbrook a little sweeter with the treats she enchants at her mentor’s bakery. But when Magda passes, she leaves everything to her grandson, Rafe. Trixie’s girlhood crush, who moved away years ago.

Now he’s back, and distractingly hot, and his touch sends magic tingling through her skin. Which makes no sense, because he doesn’t even believe in Moonbrook’s magic anymore.

And if Trixie can’t change his mind, he’s going to sell to the highest bidder.

Rafe Greensbury didn’t expect his estranged grandmother to leave him everything, but she did. Including some property that a client of his architectural firm would love to develop. The catch is, he has to stick around Moonbrook for a few weeks.

Which means more time with his gorgeous childhood friend Trixie. Great, except when they touch, delusions that took years to forget come flooding back. So he probably shouldn’t have asked her to show him around. Or suggested that she might convince him not to sell.

Especially since the deal is already as good as done.

K. C. Lapointe is a lifelong lover of all things magical and romantic. Growing up in a small town in the Pacific Northwest, she learned the magic of such places at an early age—her books just make that magic a bit more literal.

When she’s not writing, K. C. loves to read romance (magical or otherwise) and watch Hallmark movies and romcoms. And she never gets enough of adventures in small-town living, from visiting the local pumpkin patch to hiking nature trails.

More than anything, she just wants to add a little magic to the lives of her readers!